After spending some time with the latest build of the all new DC Entertainment/NetherRealm Studios fighting game, “Injustice: Gods Among Us,” it’s safe to say that fans will ultimately be pleased. New characters were shown, amazing battles were contested, moments of excitement occurred after environmental destruction and epic story mode snippets were shown. I sat down with NetherRealm’s Marketing Game Manager, Brian Goodman, as he took me threw some of the game’s new modes and showed off two of the game’s newest combatants.

Here are the top ten things you need to know about this soon-to-be released DC Entertainment fighting game:

1. Raven’s Moveset is Too Cool

Tons of people requested her and I’m happy to say she’s in (and awesome). As Raven levitates off the ground, she’s ready and willing to throw some dark magic in her opponent’s path. Her special moves are what you’d expect – a nice mixture of dark magic mid-range attacks and grapple maneuvers. Her super move pays homage to her demon daddy Trigon, which is a sight to behold. Check out her rooftop battle against Catwoman in the above video.

2. Doomsday’s Super Move May Be The Best One Yet

The baddie who laid Superman to rest is (thankfully) a part of the game’s official roster. As expected, Doomsday is a nasty spiked brute who utilizes tackles and devastating mid-air stomps. But his super move may be the icing on the cake. Just take a look at how destructive Doomsday can be. Even our planet’s core isn’t safe from his fisticuffs fury! Poor Shazam…


Now here’s an awesome reveal for ya – Shazam’s arch rival has finally been added to the game’s official roster. His badassery knows no bounds. Black Adam’s special attacks revolve around his use of thunder shields and powerful lighting strikes that are bound to piss off whoever you’re playing against. And that’s the sweetest part of all. Check out the pics and trailer above for even more evidence of Black Adam’s inclusion in the game. Adam’s actually one of the planned action figures set to commemorate the release of the game on April 16th, 2013. On a side note, we may just have gotten an early glimpse at one of the game’s first DLC roster additions, Lobo:

4. The Environmental Interaction Will Floor You…Literally


My jaw hit the floor at the sight of all the environmental attacks that were possible during a match. I crushed Nightwing with a car cruiser, electrified Aquaman with some loose wires (DUH!), and pushed a trash can into The Joker’s sternum. The impactful sound effects make every last interactive attack better than the rest. I asked if the environmental attacks could be turned off, just in case players want to engage in a fair fight without having to worry about getting killed by their sorroudnings. I was told that this request is being considered, so maybe Injustice could make a fair splash at EVO if it catches on.

5. The S.T.A.R. Lab Missions Give You Even More Replay Value


Just like MK’s Challenge Tower, there’s a whole separate mode dedicated to special missions. Every superhero/super baddie has a long list of personal missions to complete. These missions range from learning beginner combos, defeating enemies with specific attacks, or throwing certain items at bigger foes in order to deal some real damage. The replay value for this game is going to be off the charts. The difficulty on these missions varies, so players of all skill levels will have no problem finding a mission they can handle.

6. The Story Mode Will Be Just As Good As MK9

If you’ve been following the comic book for the game, then you should have an idea of what you’re about to get into. Just from watching the opening cutscene alone, I can already tell that this game’s story mode is going to be amazing. It still retains that aspect of the last MK where you’ll transition from cutscenes to actual gameplay and get to use different characters. What Injustice does different though is the added bonus of minigames before the fight takes place. As Batman, you’ll get to hit Lex Luthor with batarangs as he makes his way towards you. Be successful and you’ll get to knock some life off of him before the fight. Fail and you’ll just have to go at it with equal vitality. For anyone looking to get a glimpse at the story mode intro, check out the video above.

7. You’re Going to Love The Cameos


There’s so much going on in the backgrounds of the game’s stages. Imagine my excitement at the sight of Dr. Strange pacing around in the background while I fought inside the infamous Arkham Asylum. And when you bust you foe through a wall, Killer Croc, The Penguin, Two-Face, and The Riddler deal some massive damage to their uninvited visitor. The game’s other stages have plenty of cameos that hardcore DC enthusiast will lose their mind over (OMG, THERE’S PARASITE AND METALLO!).

8. You Don’t Have to Hold A Button to Block


Unlike the Mortal Kombat games, you won’t have to hold a button to block. Like most fighting games, you’ll just have to hold back to keep your defenses up. For someone like me who always disliked that feature about MK, this new mechanic is a blessing. You’ll be able to immediately string some nice combos together without that half-a-second delay that used to come from taking your finger off the block button.

9. You’ll Gain Experience For Everything You Do


From S.T.A.R. Labs to online battles, players will gain experience for every little action they perform in the game. No playtime for this game will feel wasted, since you’ll gain new levels and nab cool unlockables as time passes on. Ed Boon himself went on Twitter and explained how this XP system will help unlock special items for play:

RT ‏@rsbutcher @noobde We’ve seen plenty of awesome alternate costumes, but how are they unlocked my friend? EB: We gotta great XP system.

10. You’ll Get To Customize Your Online I.D.


The game’s “Hero Cards” will be customizable player I.D.’s that will display your overall experience and unlocked images. You’ll also get to see physical representation of how far you’ve come since starting the game’s wide array of game modes. For some extra information behind the game’s development, take a peek at this infographic chart: 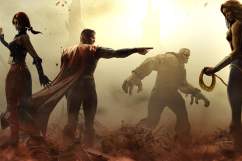