Rocksteady Studios has crafted two of the finest superhero helmed video games in recent memory — Batman: Arkham Asylum and Batman: Arkham City. For the next video game starring “The Dark Knight,” the development duties have been handed over to Warner Bros. Games Montreal. And this time, they’re crafting a prequel to the previous Arkham video games: Batman: Arkham Origins.

According to Game Informer, the game will utilize the custom modified Unreal development engine that Rocksteady used for its games. Creative director for the game Eric Holmes has experience when it comes to creating open world video games, thanks to his work on The Incredible Hulk: Ultimate Destruction and Prototype. Holmes has also done work on comics, as he wrote for Transformers: Megatron Origin.

This game will let players control a younger version of Batman as he encounters a group of super assassins in Arkham City.

One of the supervillian’s Batman will be contending with is Deathstroke, who can be seen on the Game Informer cover pic above.

A few tweets about the game have already made the rounds on the world wide web:

So here it is. Game Informer exclusive announce of our new game: BATMAN: ARKHAM ORIGINS gameinformer.com/b/news/archive…

I was lucky enough to do a tiny bit of writing for Arkham Origins for my friends at WB Montreal, right before I joined Ubisoft.

Yes, Deathstroke is in the new Arkham game and, yes, that is awesome. @wbgamesmontreal @ericholmeslive

Batman: Arkham Origins will hit stores on October 25, 2013, on Xbox 360, PS3, Wii U, and PC. Game Informer posted a video showcasing the developers and their work on the game thus far:

On the same day that game releases, a portable Batman adventure will also arrive. That game (which is entitled Batman: Arkham Origins Blackgate) will land on the PS Vita and the 3DS. This game will take place after the events of the console game and will let players control Batman in a 2.5D exploration adventure.

The developers behind this game are Armature Studio, the devs behind games such as Metal Gear Solid HD Collection on PS Vita. 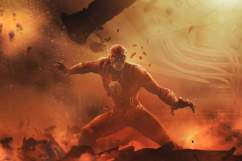 ‘Injustice: Gods Among Us’ Battle Arena Results – ROUND 3 [VIDEOS] 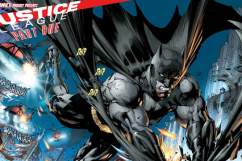 Batman’s Beginnings to be Explored in Upcoming ‘Batman: Zero Year’

And here are some in-game photos from the upcoming DC title: