Atlus and Vanillaware are putting their publishing/development talents together to release an exclusive PS3/PS Vita beat ’em up – Dragon’s Crown. Here’s what you need to know about this game’s development, its game mechanics, and the controversy surrounding the character design.

Dragon’s Crown is set up as an action role-playing game that’s structured like an old school beat ’em up game, where the characters move across the screen and engage in battle with several enemies. Each character can use standard melee attacks, as well as various magic spells that deal damage to several enemies. Items such as equipment and healing potions can be acquired along the way, plus quests can be undertaken for even more rewards. The game seems to pay homage to classic beat ’em up games, such as Golden Axe and the Dungeons and Dragons games produced by Capcom.

George Kamitani initially had the idea for the game about 13 years ago, which came after the completion of the Sega Saturn game Princess Crown. None of the video game publishers at the time were willing to approve the project, which was originally slated to launch on the Sega Dreamcast. UTV Ignition Entertainment were slated to publish the game after it was announced at E3 2011. but Atlus took over those duties in April 2012.

Players will be able to play the game with 6 different playable characters – the Fighter, the Amazon, the Wizard, the Elf, the Dwarf, and the Sorceress. Different color variations can be accessed for each character’s outfit. Team attacks are also available. Vanillaware president George Kamitani spoke to Siliconera about the character’s classes:

Throughout the game, players will find weapons, which can be leveled up. Dragon’s Crown also RPG elements, but specifics have not been finalized yet. Each class in Dragon’s Crown is different. The amazon has weak defense, but she has powerful attacks. In contrast, the fighter has high defense. The Wizard takes time to cast magic attacks. These are very strong, but the wizard needs other characters to protect him while he’s charging up. This is one of the ways Dragon’s Crown encourages cooperative play.

3. The Co-Op Mechanics Are Unique

The game employs local multiplayer, as well as online multiplayer for up to four players. If one character end up running out of lives during online play, another player can collect their remains. Afterwards, those remains can be traded into special merchant characters who can revive them as A.I. characters.

4. Both The PS3/PS Vita Versions Are Compatible

5. This is the First HD Game Developed by Vanillaware

Vanillaware (known for developing Odin Sphere and Muramasa: The Demon Blade) are the creators behind this new action/adventure. Dragon’s Crown is also the first HD game developed by this game studio. Kashow Oda, the producer behind the game, also spoke to Siliconera about the game’s development and yearly progress:

As a publishing producer, I helped [George] Kamitani (founder of Vanillaware) from a business perspective. We discussed what platforms are best for the game and what upcoming formats are coming to the market. Kamitani-san had an idea for this game for thirteen years. During that time, Kamitani spoke with many publishers and industry members. However, Kamitani was not able to find support for this title. When Ignition met with Kamitani we agreed to publish Dragon’s Crown. First, we respect Kamitani’s artwork and unique style. Secondly, with online play becoming more popular, Kamitani’s idea could finally be realized. We felt now it was the time to release Dragon’s Crown, especially with Sony’s new hardware, PlayStation Vita, coming to the marketplace.

6. One of the Game’s Art Directors Worked on a Capcom Beat ‘Em Up

It’s no surprise that art director George Kamitani art style is readily familiar to gamers. That’s because he previously worked on Capcom’s past Dungeons & Dragons arcade beat ’em up – Tower of Doom.

7. There’s A Reason For the Game’s Inclusion on the PS Vita

George Kamitani provided an explanation to Siliconera as to why the game is also being developed for the PS Vita:

Due to the success of Monster Hunter in Japan, we wanted our game to have a feature where people can get together and play. Since Vita is coming out soon we thought it would be great to start with it, also because players can play with PlayStation 3 players too. That’s another advantage of bringing a cooperative game like Dragon’s Crown to Vita.

8. There’s Been A Ton of Controversy Around the Character’s Art Design

The popularity of this game can be attributed to the controversy surrounding some of the game’s female avatars. In particular, the sorceress is drawn to be very…”well endowed.” Plenty of gamers are displeased over the over exaggerated body design of the sorceress, which is said to be symbolic of sexism and the representation of females in the gaming industry. Jason Schreier of Kotaku posted an article that summed up the design of this character in one scathing sentence:

As you can see, the sorceress was designed by a 14-year-old boy.

In response, art director George Kamitani posted a letter to Schreier. One of his comments explains the reasoning behind the way he drew the male and female characters:

Tian of Tyrant & Gore presented a piece that labels the entire controversy as “stupid.” One of his reasons for this argument can be read below:

I seriously doubt designer George Kamitani intended to promote the exploitation of women with his character designs. But let’s ignore artistic intent; we have to see what the sorceress actually does in the game to gauge whether or not she perpetuates sexism in gaming. Unfortunately I can’t say much about that because all I see her doing in trailers is killing monsters. You can’t make a snap judgment about a piece of design taken entirely out of context.

9. The Game is Releasing in Japan First

Dragon’s Crown is being released in Japan on July 25, 2013. As for the North America and European regions, its releasing on August 6, 2013 and sometime later this year, respectively. The PS3 version will cost $49.99, while the PS Vita version will retail for $39.99.

10. A 64-Page Art Book Is Being Offered to Those Who Pre-Order the Game in North America

For anyone who’s pre-ordered the game in North America, they shall receive a 64-page softcover art book that features full-color illustrations from the game. Some of the art in this book will also come from famed video game/Japanese anime artists, such as Akira Yasuda, Kinu Nishimura, and Gouda Cheese aka “BENGUS.” 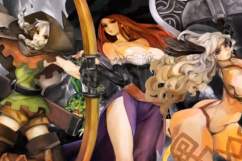