The Sony-exclusive FPS series, Killzone, is making its debut on the company’s latest portable console. Killzone: Mercenary takes players back to the beginning stages of the conflict between the ISA and the Helghast regimes. And this time, you’ll get to shoot nameless folks in the face as a mercenary-for-hire. Here’s the five fast facts you need to know about this portable FPS.

1. The Game Takes Place After the First Killzone

Killzone: Mercenary’s plot takes place right after the events of the very first Killzone game on the PS2. Here is the official synopsis from the Sony PlayStation blog:

Starting just after the ending of the original Killzone, and revisiting many of the events from the Killzone trilogy, the game puts players in the rugged combat boots of a mercenary named Arran Danner. Danner is a former UCA-soldier who has no qualms about taking on paid contracts from the ISA as well as the Helghast. When a seemingly routine mission to evacuate the Vektan Ambassador and his family in Pyrrhus goes awry, Danner discovers that the outcome of the war could very well depend on the fate of the Ambassador’s young son. With both sides going to increasingly desperate lengths to get hold of the boy, he begins to wonder whether the price of victory is really worth the paycheck.

During an interview with the Sony PlayStation blog, Piers Jackson, who’s leading the development of the game at Guerrilla Cambridge, provided some more details about the game’s narrative:

Mercenary starts shortly after the beginning of Killzone 1. We commence the game with the battle for Vekta in full flow – you actually start out in a destroyed Vektan city and the opening few levels are all about liberating the planet. We then transition into the Killzone 2 universe and the invasion into Pyrrhus. The story itself wraps up at some point in the Killzone 2 universe.

2. You’ll Be Fighting Alongside the ISA and the Helghast

Arran Danner is a mercenary, which means he has no alliance with any of the warring factions…unless the money is right. The game will place Danner alongside various specialists from both the ISA and Helghast factions. These missions are given to Danner due to their extreme conditions, which the regular soldiers of each faction cannot undertake. After being given a contract by either side, Danner will be able to customize the tactics and weapons loadout needed to fulfill that contract. Once the mission has been completed, the employing faction will reward Danner with more lethal weaponry and cash rewards. Piers Jackson spoke about the missions in detail with the Sony blog:

We have nine single player missions. On average, on a first-time play-through, they’ll take between 40 minutes and an hour each to complete. So, it’s a lengthy game. It’s got a full narrative too – every mission brief is set up as a full story. There are twists and turns. It’s a very detailed single player experience; it’s not cut back in any way.

3. The Game Uses A Modified Version of the Killzone 3 Graphics Engine

Killzone: Mercenary was introduced to the gaming audience at gamescom 2012. The game is said to feature a modified graphics rendering engine from Killzone 3, which is quite impressive since that game was on the PS3. Killzone: Mercenary’s in-game lighting and smoke, high-res environmental textures, shiny metal objects, and realistic-looking shadows will make good use of K3’s engine. Piers Jackson made sure to explain how the graphics engine translates to this portable shooter:

It’s optimized in a lot of locations but the core AI system is based precisely on Killzone 3. We’ve had to replace a few of the audio and rendering systems but the back-end leading into them is pure Killzone engine architecture. We’ve also got certain things in the renderer that are unique to our system – we’ve added reflection mapping on the floor and particle systems can actually be lit as well.

4. The Additional Features of the Game Include Challenge Modes and Touch Screen Interfacing

Each of the game’s missions will offer three separate modes of play after being completed – Covert, Precision and Demolition. These three modes focus on different aspects of play, which is readily apparent by their titles. Piers Jackson gave some more info on what these modes entail:

When you first get to a level, there’s a standard play-through mode. Once you’ve completed that you’ll unlock three challenge modes – Covert, Precision and Demolition. Each challenge mode will dictate that you need to play the level in a different way. You may have gone in guns blazing first time, but if you take the Covert challenge you’ll need to be much more stealthy – you can fail it if you get detected. Precision is usually about accuracy and how you’re taking out the enemy – headshots, melee kills, interrogations. There can also be a timed element to it. We also have gun challenges in there as well, so you may have to play the mission using a certain weapon. Demolition is largely about exploding things, as you might expect! You’ll have additional requirements in the mission that you’ll need to destroy.

When it comes to the game’s melee system, the PS Vita’s touch screen can be used to cut enemies and subdue them silently.

5. The Game Is Launching Earlier Than It’s Expected Release Date

At first, Killzone: Mercenary was supposed to release in North America on September 17, 2013. But now it’s coming a bit earlier, thanks to this new release date – September 10, 2013. 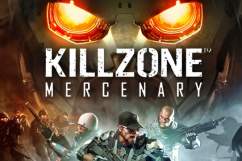