This latest gaming rumor surrounding Nintendo may add some some more fuel to the gay marriage debate.

Nintendo Life first reported that Nintendo’s 3DS “Sims” like game, Tomodachi Collection: New Life, includes the option to sanction gay marriages between the male Mii avatars. This supposed feature is a “glitch” that doesn’t allow the female avatars to marry each other, however. Nintendo has announced they’re preparing to “fix” the “glitch,” which would disable the option to marry men and raise kids with these married avatars.

Kotaku posted up some info about a Twitter user who contacted Nintendo about this supposed in-game error:

One Twitter user claims to have contacted Nintendo’s customer support, which supposedly said this is a bug and that the game needs to be patched. Online in Japan, however, there were many internet users who said they planned on getting this game only after learning of this bug—er, feature.

Several other reports suggest that Japanese users seem quite pleased and enthusiastic about this apparent “glitch.” It remains to be seen if Nintendo’s rumored patch for the game will come under fire from the supporters of gay marriage. 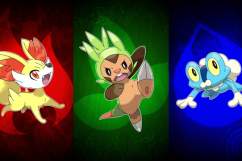 Pokemon X and Y: Game Trailers and Gameplay Videos You Need to See