Warner Brother’s DC Entertainment has been known for putting out (mostly) consistent content for years, and that includes forays into video games. Given that DC focuses a lot more on their solo characters, particularly Batman, Superman and Green Lantern, than Marvel does, its no wonder that DC has had an easier time adapting their IP’s to other trans-media proprieties. While Marvel’s team movie effort The Avengers has proven wildly successful, DC’s Dark Knight trilogy, recent Man of Steel film and the entire animated universe helmed by DC animation veteran Bruce Timm has defined an era of superhero cartoons and direct-to-dvd animated features.

Given DC’s strong outings in their film and animation departments, here are the top ten DC Comics video games you need to check out. DC’s answer to Marvel’s Ultimate Alliance franchise, Justice League Heroes is a 2006 top down beat ’em up Action RPG that allowed up to two players to control some of DC’s well known superheroes in action, including Batman, Superman, Green Lantern and others. While the game is not as big as explosive as Marvel Avengers Alliance the writing and combat are more fleshed out, and the game closely follows the aesthetics of DC’s animated Justice League cartoon, which is likely the highest quality DC animated TV show to date. Fans of the Justice League show will enjoy this one.

2. The Death and Return of Superman

A beat ’em up developed by Blizzard Entertainment in the heyday of the 90’s, The Death and Return of Superman closely follows the Death of Superman storyline from the comics. Players have the option of controlling The Cyborg (Hank Henshaw), Eradicator, Superboy, Steel, as well as Superman himself. Each character has standard melee and ranged attacks, as well as a special move. While the game is not iconic by any means, it’s certainty one of Superman’s better outings in the video game world.

3. Watchmen: The End is Nigh

Released to coincide with the Watchman film in 2009, Watchman: The End is Nigh is a two part episodic action beat ’em up that serves as a prequel to the established Watchman universe. The game puts players in control of Rorschach and Nite Owl II during their vigilante crime fighting games, either as a single player experience or a two player co-op.

While the writing is not brilliant by any means, and the gameplay is inspired, if not a bit repetitive Watchmen: The End is Nigh represents a worthy addition to the Watchman universe, and gives us a bit of insight into the world before the events of the iconic Alan Moore penned Watchman.

A downloadable first person shooter, Gotham City Impostors is inspired by the conflict between Batman and Joker in the comics storyline Batman: Imposters, and takes a bit from other iconic Batman vs. Joker storylines, including The Dark Knight. Gotham City Impostors features two playable teams of six, the Batman team and the Joker team.

Each character is heavily customization, from their gear and weapon loadout, to their physical appearance, and although the game takes several cues from Activison’s iconic Call of Duty franchise, the game is wacky and chaotic enough to stand up on it’s own. While it was originally released with a modest price tag, Gotham City Impostors has gone free-to-play for PC, Xbox 360 and PS3, so there’s no harm to your wallet in checking it out. 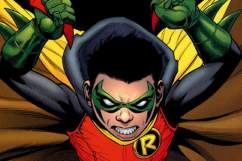 The followup to the now-classic Batman: Arkham Asylum, Batman: Arkham City expands and gameplay established in its predecessor with great results. Writer Paul Dini, veteran of Batman: The Animated Series, pens the story, which pits Batman against a slew of iconic villains, including the Joker and Dr. Hugo Strange.

While Batman: Arkham City doesn’t have the ‘wow’ factor of its predecessor, its expansive universe and refined gameplay make it more than a worthy addition to the Batman: Arkham franchise of video games, which are by and large the best treatment Batman has gotten in video games.

6. Green Lantern: Rise of the Manhunters

Hal Jordon hasn’t been too lucky outside of the DC Comics universe. His solo movie outing, starring Ryan Reynolds, was critically and commercially reviled, and he was eschewed for the admittedly more original John Stewart iteration of Green Lantern in the Justice League animated TV show. Still, Hal Jordon is the original, and Green Lantern: Rise of the Manhunters reminds us why that’s important.

The definitive Batman video game title, Batman: Arkham Asylum recreated the Batman as a powerful and serious force within video games. The game involves Batman going into Arkham Asylum to stop a hostile takeover of the insane asylum by none other than the Joker. The game forces Batman to deal with his inner psyche as he fights many of his most dangerous villains who are locked in Arkham with him. The game brings back Batman: The Animated series veteran voice actors Kevin Conroy, Mark Hamill, and Arleen Sorkin as Batman, the Joker, and Harley Quinn respectively.

The story, also penned by Paul Dini, turns to Frank Miller titles for a feel for Batman, but ultimately uses Grant Morrison’s Arkham Asylum: A Serious House on Serious Earth as its primary inspiration. With inspired gameplay, a wonderful plot and great characterization of Batman and his rouges gallery, Batman: Arkham Asylum represents the definitive Batman video game to date.

Originally requiring a $15/month subscription. DC Universe Online recently went free-to-play recently, which is definitely a reason to check it out. The majority of the universe is written by DC’s Chief Creative Officer Geoff Johns, with Co-Publisher of DC Comics Jim Lee serving as Executive Creative Director. DC Universe Online allows players to create their own heroes, which fit a certain heroic or villainous archetype. Rather than following the World of Warcraft mold of MMORPG, DC Universe Online takes great pains to define itself within the genre by focusing way more on the super-heroic action.

Players have the option of joining the hero or villain faction, which defines the players gameplay experience. Given its free-to-play status, there’s no reason (except time) to not make an account for yourself and see what DC Universe Online has to offer.

Based off of the Superman: The Animated Series universe, Superman: Shadow of Apokolips is a 2002 action-adventure title released for the Nintendo Gamecube and PS2. The game pits Superman against a villainous alliance between iconic Superman villains Lex Luthor and Darkseid as he attempts to overcome the evil duo. While not a brilliant game by any means, Superman: Shadow of Apokolips represents Superman’s definitive solo video game, which really isn’t saying too much at all.

10. Injustice: Gods Among Us

The latest DC video game title, and the only legitimately good DC fighting game to date (sorry, Mortal Kombat vs. DC Universe was not that great), Injustice: Gods Among Us creates a gritty alternative universe that takes several cues from the DC Comics alternative universe Earth-Three. Besides a solid combat system and a much-welcome list of frame rates for character special moves, Injustice: Gods Among Us features a compelling roster of characters both iconic and obscure, ranging from Batman and Aquaman to Cyborg and Wonder Woman villain Ares.

Violent, inspired and more violent, Injustice: Gods Among Us presents a legitimate challenge to other mainstream fighting games, and is a great follow-up by developer NetherRealm studios to the Mortal Kombat reboot.