Ubisoft is in the process of fine tuning their next animated platformer release, Rayman Legends. Here’s all the facts you need to know about the game’s plot, multiplayer details, and all the new game additions that will come along for the ride.

1. The Story Involves One of Rayman’s Best Friends

Rayman Legends lets players take control of the lead character, his best friend Globox, newcomer Barbara and the Teensies. Their adventure begins when they come across a variety of legendary paintings that offer a different theme for its playable worlds. After getting sucked into these paintings, Rayman and his buddies must traverse the locales that these drawings house.

2. The Gameplay Is One Part Platforming, One Part Rhythm Gameplay

Most of the game’s 30 levels focus on simple and complex platforming sequences, which involve running, jumping, punching enemies and collecting the game’s currency (Lums). The game’s other levels focus on rhythm-based gameplay, which has the player reacting to a song being played while they traverse through levels full of enemies and obstacles. One player can take control of a character named Murfy, but with a different control scheme…

3. The Wii U GamePad and the PlayStation Vita’s Touch Screen Are Both Compatible

While speaking with Nintendo Life, lead game designer Emile Morel provided some details on the game’s touchscreen capabilities and functions:

The gameplay experiences will be different on each platform in the Murfy levels, but what is sure is that only the Wii U version will offer a touch control of Murfy. And this is possible thanks to the Wii U GamePad. In the final game you’ll see that we’re really showcasing all the cool ways to use this controller in a fun and rich experience. One of the great things on the Wii U version is also the possibility to play the full game only on the screen of the Wii U GamePad if you want, without the TV! In single-player mode you’ll have to play with Murfy in less than 20% of the game. But in multiplayer you’ll have the possibility to play with Murfy in almost every level of the game. In single-player mode we want players to experience the touch gameplay with Murfy. It’s really a brand new to play a Rayman game and there’s a lot of variety and some serious challenges in these levels too. Also these levels offer some nice breaks in the adventure, just like the Moskito levels did in Rayman Origins.

4. The Game Was Leaked During An Online Survey/Game Trailer

In order to appease the game’s angry fans, Ubisoft released an Online Challenge mode for free through the Nintendo eShop on April 2013. Emile Morel offered a description of the mode to Nintendo Life:

This totally free application contains the online Challenge Mode of Rayman Legends. In this game mode you’ll find Daily and Weekly Challenges to compete with your friends and players from all around the world!

– a crazy run in Land of the Livid Dead.
– a journey in the vertiginous Neverending Pit.
– a climb of the Infinite Tower as fast as possible.
– Murfy’s Dungeon, a challenge dedicated to the Wii U GamePad where you play as Murfy on the touch screen.

Every day and every week, new and totally exclusive levels are randomly generated thanks to our brick system designed to build these challenges. So every day when you connect to this application you discover a new challenge. This application will give players many hours of fun! And we, members of the Rayman development team, can’t wait to play these challenges with all the Wii U owners! The Challenges App will be supported until the release of the full game. So players will have several months to enjoy this free application! The Rayman dev team will provide some exclusive tips and tricks for Wii U owners on Miiverse and on Facebook, these tips will help you improve your scores in the different challenges! We’ll also organize contests between our fans and the Rayman dev team.

Check out some gameplay footage of this mode above.

7. The Game is A Direct Sequel to Rayman Origins

Rayman Legends is a direct sequel to 2011’s Rayman Origins, which includes the same animation and platforming mechanics that will be featured in the latest game.

8. The Game Was Designed by Michel Ancel

Michel Ancel, one of the main designers behind this game, is a popular French video game designer for Ubisoft. His greatest accolades include creating the Rayman games and developing the cult hits Beyond Good & Evil and Peter Jackson’s King Kong.

9. The Pre-Order’s For The Game Include Ubisoft Costume Downloads

For those who pre-order the game from GameStop, they will receive special costume downloads that are lifted staright from Ubisoft’s other gaming franchises. Costumes based on Splinter Cell, Assassin’s Creed, and Prince of Persia will be available. The game will be available for the PS3, Xbox 360, Wii U and the PS Vita on September 3, 2013 (August 30, 2013 in the U.K.).

10. This is The Fifth Main Rayman Game

Rayman Legends is classified as the fifth main game in the Rayman series. The other four games include: 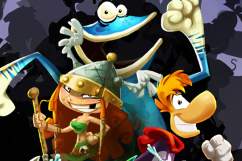