Activision’s Skylanders franchise has surprisingly taken off since its debut on several video game consoles. Young gamers and adult gamers have all joined in to experience the addictive gameplay and toy collecting associated with the series. I played the last two iterations in the series and now I’m ready to spend countless hours playing the next one.

Luckily, I got to play Skylanders: Swap Force a little bit earlier than I expected to. I came away impressed with all the new features this sequel is bringing along with it. These are the top 10 facts you need to know about it.

1. Swap Force Figures Are Being Added to the Game

During my initial time with the demo, I got to check out some of the newest figurines that will be playable in the game. A total of 16 Swap Force characters means there’s many more on-screen avatars to level up and more collectible toys to add to your Skylanders roster. My favorite out of the new group has to be Free Ranger, a bird-like creature who’s capable of swinging blades that are powered by the wind.

Here’s the full list of names you’ll need to know, since these are the Swap Force figures you’ll be purchasing in a few months:

Check out the two vids below (courtesy of CoinOpTV) showcasing Fryno and Roller Brawl:

Check out Game Informer’s list for all the figurines sets releasing later on for the game.

2. The Swap Force Figurines Can Be Customized to Unlock New Skills The coolest part about getting some new Swap Force characters is their inherit ability to be swapped together. Each Swap Force figurine has a detachable top half that can be put onto another Swap Force hero. By placing a joined figure on the portal, the combined character will feature the two elemental attacks/abilities of each one.

For example, I combined Free Ranger’s top half with Hoot Loop’s bottom half in order to create a new on-screen avatar for my playthrough – Free Loop. I also managed to combine Blast Zone’s top half with Wash Buckler’s bottom half (Blast Buckler! That name is boss status!). There are 256 different Swap Force character combinations in total, so there’s plenty of custom combined heroes to go around. This “combine to win” theme behind the game carries over to the game’s puzzles, too. Players will be tasked with combining two separate bolt avatars, which in turn gives players a new item.

3. A “Jump” Button Has Finally Been Added

One of the most ardent requests from fans of the series has been a simple mechanic that’s now a part of the game – a jump button. This simple gameplay addition opens up the level exploration even more, as you’ll now engage in platforming sequences that test your new jumping skills. I used Sypro during one stage that employed the use of moving platforms, which was a tad bit harder to land on while I was being targeted by a background enemy. For those gamers who dismiss this game as your typical kiddy game fodder, you’d be surprised to see how challenging this game can be at certain points.

One thing that’s instantly notable about Skylanders: Swap Force is its move to HD graphics. The visuals evoke a sense of watching a Pixar film, as well as a slight sense of claymation when it comes to how the characters look and move. I got my hands on the Xbox 360 version, which looked pretty sweet. I can just imagine how much improved the visuals will be once this game lands on the Xbox One and PS4.

One of the coolest portions of my time with the game revolved around the bonus elemental zones. The stages include locked gates that can be opened by a single player or with a friend. These zones show the elements required to open them, which can also be referred to when viewing the elements on your character’s life bar.

You can either combine two Swap Force characters and use their two elemental strengths to enter a new zone. Or you can employ the help of a friend and enter the gate together with both of your beneficial elemental powers. You can even employ both of the aforementioned options. The world of Skylanders is your oyster.

When you complete a mission with a Swap Force character, they’re awarded with a new mission. This new mechanic helps increase the replayability value of the game, since every time you finish a mission, you’re bound to roll right into a new one. Once the game launches, a set of adventure and battle packs will help lend more content to the game even after you finish it.

7. The Co-Op Gameplay Makes A Return

One of the most addictive aspects of the game is the co-op. There’s a certain level of joy that’s derived from the two-player, couch-based co-op. There’s still no online multiplayer, but the co-op aspects of this sequel is still worth investing some time into with a friend/small child. I watched as one player proceeded to climb up a wall while the other player used a shockwave move that destroyed any crates that got in the way. Of course, the co-op play means you’ll get to battle several enemies with your partner-in-tow.

Don’t worry, Skylanders collectors. Each of the characters you’ve spent so much time leveling up and purchasing will be compatible with Swap Force. The level cap for every character has now been raised to 20, too. Your old Skylanders figures will thankfully come with new attacks and abilities to coincide with the new Swap Force members. Eight new LightCore figurines and 16 redesigned versions of past heroes will coincide with the release of this game.

9. Three Different Development Teams Are Working on the Game

Vicarious Visions is developing the PS3, PS4, Xbox 360, Xbox One and Wii U versions of the game. As for the sole Wii version, Beenox is handling the game’s development duties. n-Space is being tasked with developing the portable 3DS edition.

10. The Game is Coming to Practically Every Console

If you happen to own any current-gen consoles or you’re planning on getting the next pieces of next-gen hardware, you’re in luck. Skylanders: Swap Force is coming to all of these listed consoles – PS3, PS4, Xbox 360, Xbox One, Wii, Wii U and the Nintendo 3DS. The US release of this game will fall on October 13, 2013, while the Australian release will fall on October 16, 2013. UK fans can look forward to returning to the world of Skylanders on October 18, 2013.

And as an extra treat, check out this infographic for the game’s successful toy sales: 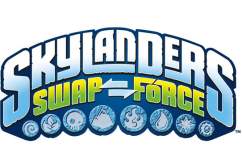