So E3 2013 is in the books, folks. It was a super eventful occasion that was marked by awesome press conferences and amazing trailers for a slew of anticipated games. After the dust settled, we noticed a few games didn’t show up to E3 2013 with all new footage or new developments. There’s 10 games in particular that we wished would have shown up at this year’s biggest video game expo. These are the top 10 games we wanted to see at E3 2013.

Back in May of this year, hardcore fighting game purists got an extended look at the next entry in the long running Guilty Gear series. The Unreal engine powered graphics and new air combo mechanics were shown in an awesome debut trailer that we watch at least 10 times a day. As E3 2013 finally rolled around, we were expecting to see some new footage and maybe an explanation of the first trailer’s final scenes. But alas, we didn’t get the pleasure of seeing something new for this 2.5D sequel. The presence of fighting games at this year’s convention was strong, but it would have been even more stronger with the presence of this fighter. We would have freaked out over a new vid showing off a new character, special move, stage…ANYTHING!

During Sony’s PS4 event, Capcom took the stage to announce its next-gen franchise – Deep Down. Many people speculated that this was the definitive sequel to the company’s action RPG IP – Dragon’s Dogma. The trailer featured a dude sporting some medieval armor and a dragon who made sure to give a nice case of flames. We figured the game would show up again during Sony’s press conference, but…it didn’t. We’re pretty puzzled about this game’s exclusion from Sony’s stage show, but we figured that Capcom is still trying to figure out what it wants to do with this game. Will it stay as a PS4 exclsuive or will it move over to the Xbox One? Is the game coming out this year or next year? So may questions we wish would have been answered at E3 2013.

You know what’s a sad fact? THQ is no longer alive. As gamers, we know THQ as the main publisher of WWE’s video game series. When we heard that THQ went under, we were glad to hear that 2K Games took over the publishing rights to the series. WWE ’13 came with an abundance of awesome modes and roster additions that we hope make the transition over to this sequel. We were surprised when WWE2K14 didn’t hit up E3 2013 and debut a teaser trailer. 2K Games attention to detail for its sport games is unparalleled, so we’re excited to hear anything about their involvement with pro wrestling games. There’s been a few rumblings about the game here and there, yet we’re still starving for some offical news on it. If Sony or Microsoft wanted to showcase a “sports” game we really cared about, it would have been this game.

Anyone watch the Nintendo E3 2013 Nintendo Direct? We’re sure you Nintendo diehards got a kick out of all the new game trailers they threw up on their livestream. However, we were a bit deflated when a new F-Zero wasn’t even mentioned or even hinted at. You know what added on to that disappointment? Watching Mario Kart 8 incorporate hover vehicles. NINTENDO’S TEASING US! F-Zero has lied dormant for years since its GameCube/Arcade entry (which was punishingly difficult, but fun). Nintendo’s standing at E3 2013 would have been more noticeable if they showed gamers new entries for its lesser represented games. Where are you, F-Zero? Captain Falcon will have to resurface in his Blue Falcon one day…

Nintendo’s E3 2013 livestream for its Nintendo Direct was awesome for one thing and one thing only – the new Super Smash Bros. and the addition of Mega Man. Sure, the Bayonetta 2 and Mario Kart 8 trailers were great portions of the Nintendo Direct, but the big N’s fighting game reveal took center stage. You know what game reveal would have blown our minds all over our computer screens? A new StarFox game developed by Retro Studios. Fox McCloud and his animal companions have gone missing for far too long, don’t ya think? The GameCube got two StarFox games. The Wii? NONE! That’s a problem. We would have been a lot more excited if Nintendo debuted a new entry in the series during E3 2013. Mario gets enough love these days. It’s time their space dog fighting series got at least a fraction of that love.

“Darkstalkers Are Not Dead.” WE HOPE SO! Capcom came to E3 2013 with a slew of games. Problem was the fact that we saw most of these games already. To be honest, we were all waiting on some type of news on the company’s fighting games. And the one fighting game we were really prepping to see was the fourth main game in the Darkstalkers series. Capcom re-released two notable games in the series as downloadable titles, which was cool. But they must have been testing the waters to see if the series still had a fan base worth tapping into. We remember the NYCC 2012 teaser trailer and we’re sure most of you do too. We just wish Capcom would’ve surprised everyone with an epic trailer for a new Darkstalkers. Demitri and Lord Raptor deserve more than a 30-second vid.

Is Ubisoft sill working on this game? We surely hope so. If EA has the balls to do Mirror’s Edge 2, then Ubisoft should have a set and make sure we get Beyond Good and Evil 2 before we die. Everyone got a new look at the game during Ubisoft’s E3 2011 press event. Since then, there’s been nothing but little tidbits of information about the game. None of them have helped us cope with the eternal wait that we’ve been enduring for this game’s eventual release. We were so deflated when the game wasn’t even mentioned during this year Ubisoft’s event and we’re pretty sure it saddened some of you too. We’re starting to think that this game is inching closer to closer to being cancelled. If Ubisoft would’ve given everyone a new trailer at E3 2013, those fears would have subsided…for now.

Rockstar Games doesn’t do E3. They’re just too cool to attend the biggest video game expo of the year because their events are arguably bigger. But we know for a fact that Sony would have made sure to big up Rockstar’s formerly announced PS3 exclsuive as a PS4 exclsuive – Agent. Sony already presented a strong showing during their press conference, but a new announcement regarding this Cold War open-world game would’ve been the icing on the PS4 cake. Agent was first shown at E3 2011 and, since then, leaked development photos for the game have given fans a closer look at it. Is the game still being worked on in secret or has Rockstar given it a early grave. We hope not. We just hope Agent shows u pat E3 2014, at least.

Naughty Dog just put out one of the, if not THE, best game of 2013 – The Last of Us. This Sony game development studio is known for their quality games on the PS3 and past Sony consoles. The world’s collective heartbeat would have a skipped a few notches if Sony ended their press conference with just a peek at the logo for Uncharted 4. We have a feeling that one half off Naughty Dog’s development team was putting this game together while its secondary team was busy with The Last of Us. Hey, we know Uncharted 3 didn’t come out too long ago. But Halo 4 just came out last year and Microsoft showed off a new Halo game at E3 2013! Sony should have just let the cat out of the bag during their showcase. We know what you’re making another Uncharted for the PS4. We. Know. Everything!

Where oh where has this game disappeared to? Team ICO’s games transcend the mediocrity and blandness that some of today’s games thrive off of. We’ve been participating The Last Guardian for God knows how long! Every time a new E3 comes along and nothing new for this game is shown, our fears come closer to being a reality – The Last Guardian is no more. We don’t want that to come true. The little boy and his mythological creature friend need to head to consoles sometime soon. The PS4 may just be the perfect transposition system for this eccentric action/adventure. Square Enix showed teh world Final Fantasy XV and Kingdom Hearts 3. Sony should have topped that by letting gamers know that The Last Guardian is now a PS4 exclusive. We wish, we wish, we wish… 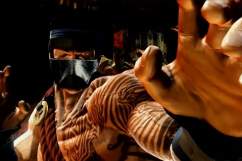