Microsoft’s Game Studios may not have a healthy amount of exclsuive franchises on its roster, but they do have a number of quality ones. At E3 2013, the Xbox One’s software lineup came to show gamers that they have some quality titles to look forward to. We’re excited about the third-party games, sure. But we’re a bit more excited at the prospect of first-party franchises for the Xbox/Xbox 360 making its next-gen move over to the Xbox One. These are the top 10 Xbox exclusives that need to appear on the Xbox One.

This hack ‘n slash series by Sega may not be as super popular as its action game contemporaries, but its just as fun. The graphics at the time for both Otogi: Myth of Demons and Otogi 2: Immortal Warriors were incredible. The Japanese-inspired supernatural landscapes and enemies gave this game an identity all its own. Besting the game’s enemies led to some beautiful, fast and fluid gameplay scenes that are just as fun to watch. The chances of seeing a third Otogi game are pretty slim, but we still hold out hope for an upgraded version with even sweeter visuals on the Xbox One. Raikoh and his crew need to make a comeback.

One of the few Kinect games we actually played for more than 5 minutes was The Gunstringer. Not only was this shooter great to look at, it was actually fun to play. So you played as a character named after the game’name. You used your body to move your on-screen avatar and take aim at all the Old West baddies that stood in your way. My experience playing this quirky game was a fresh and exciting one. Since the Xbox One is launching with a new and improved Kinect, I think Twisted Pixel should take another stab at this series. If the motion controls are even better than they were before, The Gunstringer could become something more than a typical rail shooter.

Xbox Live Arcade got a smash hit when it became a downloadable release in 2005. It first popped as a minigame in Project Gotham Racing (which we’ll get to later) and it soon became more addictive than the racing game it was packed in with. It’s hard to step away from this old school arcade-like shooter. Gamers who’ve had the pleasure (or displeasure?) of doing a 5-hour run of nonstop Asteroids or Space Invaders can attest to this game’s addictive nature, too. Geometry Wars: Retro Evolved and Geometry Wars 2: Retro Evolved 2 operated around a single concept – shoot stuff, survive, dodge stuff and watch all the pretty explosions go down. The Xbox One is going to need an amazing downloadable game during its lifespan. A third entry in the Geometry Wars series could be that go-to hit on the downloadable platform.

Microsoft owns Rare, which means Microsoft also has the right to get some games from Rare’s IP vault. Gamers have already seen how beneficial this partnership can be, thanks to the debut of a new Killer Instinct. Rare needs to ditch those atrocious Kinect Sports games and get to work on some new sequels for its existing IP’s. And the one IP we’d love to see an entry for is that foul mouthed, violent squirrel we all love – Conker. Conker: Live and Reloaded was a pretty solid port of Conker’s Bad Fur Day. The graphics got cleaned up, the multiplayer was decent and main campaign kept supplying the laughs crudeness alive. Rare, I’m going to need you guys to send Conker over to the Xbox One. Ratchet up the violence, profanity, dirty jokes and pop culture references while you’re at it.

The Xbox brand may already have a hardcore racing sim – Forza Motorsport. That’s cool and all, but whatever happened to that awesome arcade racing game series the Xbox used to feature? Anybody remember the name? Wait, it wasssssssssssss…PROJECT GOTHAM RACING! I got a kick out of the Kudos Points engine, which was a points system that awarded you when you pulled off cool power slide’s and other stunts. We’ve always had a weak spot for arcade racing games, so we’ve been longing for another run at this series. It sucks that the original devs behind this game are no more. Microsoft needs to remedy that by tasking a talented development team with the goal of crating another Project Gotham Racing for Xbox One.

Here’s another Rare IP that Microsoft needs to take advantage of…again. Perfect Dark was amazing on the N64. Perfect Dark Zero, though? Not so great. The HD remake of the first game thankfully wiped off some of the funk that that prequel threw on the series’ good name. Rare needs to give it another go for a worthy sequel in this FPS series. Joanna Dark and her wealth of futuristic weaponry would look all types of amazing on the Xbox One, right? Fix the cover system, flesh out the multiplayer a bit and make sure the third-person perspective works a bit better. We can’t wait to cop a next-gen Laptop Gun.

Peter Molyneux’s action-RPG series may not have fulfilled all of its promised expectations, but it was still a great series. Fable gave gamers the freedom to grow their chosen hero/villain in the vast world beyond Albion. The whole series revolved around player choice, NPC interaction and player growth. The game’s visuals were kinda awkward, but they made sure to make the games stand out and develop their own identity. We’re sure that a next-gen Fable game would finally embrace the incredible features that Peter promised everyone back on the Xbox and Xbox 360. The world of Fable’s grand scope would be even grander, don’t ya think?

We know why most gamers played the first Crackdown – that Halo 3 beta. But for those who actually took the chance to play this game, they more than likely fell in love with it. I certainly took a liking to my super cop, who could jump over buildings and take down gangs all by himself. The orb collecting was supper addictive and the gunplay was solid yet enjoyable. Crackdown 2 seemed to take the quality down a notch, but it was still a fun romp through the city. Could you imagine if another Crackdown made its way over to the Xbox One? That would mean even more extreme orb collecting, crazier feats by your chosen officer and even better cel-shaded visuals. Oh, and the co-op play would be even better with four players too.

There’s no doubt that Epic Games will work another Gears of War for the Xbox 360’s console successor. The third game in the series provided a closing finale to the war between the Cog, Locust Horde and the Lambent. The following prequel game was a nice little diversion, but our time spend during that timeline seemed a bit stale at that point. We’re ready to play a new Gears of War that introduces us to a new conflict that pits human against violent lizard/alien/whatever. The cover-based shooting and Horde mode we’ve all come to know and love would get a nice upgrade of course. We’re just frothing at the mouth since we’re imaging how good Gears of War 4 would look on the Xbox One. HOW CAN THEY MAKE THIS SERIES EVEN BETTER? We still don’t know…

This is the one Xbox exclsuive we’d kill to play on the Xbox One. This massive platforming series is another quality IP that Rare also owns. When the series moved over to the Xbox 360, fans were more than deflated. Instead of collecting feathers and puzzle pieces, they were forced to construct vehicles and race all day. Huh? Yeah, we didn’t understand the concept of Nuts & Bolts either. Rare knows they should return to the platforming/exploration roots of teh first game and Banjo-Tooie. The graphics for Nuts & Bolts were already pretty enough. Could you imagine those graphics getting a substantial upgrade on the Xbox One? This potential sequel’s world would probably rival the huge world we’re used to exploring in Skyrim. Banjo and his bird buddy deserve another adventure on the Xbox One. 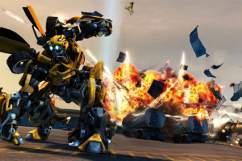