A few notable sites have gotten the pleasure of wielding these next-gen game pads, which has led to a flood of impressions about how good (or bad) they feel. First up is the Xbox One controller.

IGN gave an official description of the controller:

At a glance, the Xbox One Controller quite similar to the Xbox 360’s controller, with a different handle contour, but with off-set analog sticks, the A, B, X and Y face buttons, a directional pad, and two buttons, Menu and View, where Start and Back were. The controller maintains the overall design of the Xbox 360 controller. The directional pad has a more traditional design compared to previous Xbox controllers, and the battery compartment is slimmer. The triggers will have built-in rumble system called “Impulse Triggers.”

The Xbox One Controller features a slightly altered design from the Xbox 360 controller and some new features:

The new controller will also feature a low power state to help conserve battery life when it is not in use, so you can rest assured knowing that it won’t be needlessly draining energy while watching a movie or when away from the console.

Game Informer gave a positive impression of the controller:

If you’re an Xbox gamer already, you’re going to feel right at home when you pick up the Xbox One controller. While the changes are more subtle, there are definitely some great improvements over the last-gen unit. Overall, it’s another great controller from Microsoft.

Computer and Video Games also liked the controller. They were very impressed with the redesigned D-Pad and analog sticks:

From a functionality perspective, fans will be pleased to hear that the much-criticized D-pad of the current console has been redesigned and now feels tighter and more accurate with buttons presses rewarded with a satisfying click. The analogue sticks too have had their dead zones minimized significantly, says Microsoft.

The PS4 controller (DualShock 4) is up next. Here’s the official description of the controller from Sony’s official website:

The DUALSHOCK®4 wireless controller features familiar controls while incorporating new ways to interact with games and other players. Improved dual analog sticks and trigger buttons offer an even greater sense of control, while the capacitive touch pad opens up endless potential for new gameplay possibilities. Experience the evolution of play with the DUALSHOCK®4 wireless controller.

– Touch Pad: Located on the top of the controller, the TouchPad offers gamers completely new ways to play and interact with games.
– Light Bar: Four color LEDs offer a simpler way to easily identify players and quickly see useful game information, like when a character is low on health or has taken major damage.
– Share Button: Share triumphs and accomplishments by streaming live gameplay to Ustream or uploading recorded videos to Facebook.
– Built-In Mono Speaker and Headset Jack: Enjoy high-fidelity sound effects of games from both the TV and also from the controller. Chat with friends playing online with the bundled headset.
– New Shape: Improved ergonomics means it’s more comfortable to hold, while improved analog sticks and buttons mean more precise control.
– Enhanced Vibration: Multiple vibration motors give games a greater degree of expression and heighten the sense of immersion for players.

During a preview of Blacklight Retribution, Polygon gave a positive report on the DualShock 4’s responsiveness:

Shooting in Blacklight PS4 felt responsive, even though it used the DualShock’s formerly maligned rear triggers. While the DualShock 3’s squishy, convex inputs left a lot to be desired on the PS3 shooters which decided to use them for aiming and firing, the PS4’s — while still slightly analog — do not disappoint.

Game Informer also had a positive impression of the DualShock 4:

The most important thing I want to convey about the Dual Shock 4 is the improved build quality. All the materials, from the matte plastic of the body to the new concave rubberized control stick feel much more solid than the Dual Shock 3. The feel of it in your hand is very nice, and the new sticks are have a much tighter feel than the too-loose sticks on the Dual Shock 3. I think shooter fans are going to like them.

It looks like both controllers are both well regarded thus far. Everyone will have an opinion on which controller is much improved and better once both consoles launch this year. 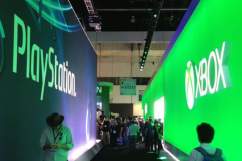