Xbox One Controller and New Kinect 2 HANDS-ON! Adam Sessler's ReactionAdam Sessler just got to go hands-on with the Xbox One's all new Kinect and controller. What does he think of the improved camera, redesigned controller, and brand new trigger haptics? Watch his reaction to find out! Subscribe for more: http://www.youtube.com/subscription_center?add_user=rev3games Watch more on the Xbox One reveal: http://www.youtube.com/watch?v=kpiP09Od18I&list=PLWnpHOQXsPDswHzfBNAI8x7_dF6Cbjvtj Music by Bill Kiley: http://billkiley.bandcamp.com Follow Rev3Games on Twitter: http://twitter.com/rev3games Like Rev3Games on Facebook: https://www.facebook.com/Rev3Games Add Rev3Games on Google Plus https://plus.google.com/110636064686881382169/posts Rev3Games Previews: http://revision3.com/rev3gamespreviews Subscribe on iTunes: https://itunes.apple.com/us/podcast/rev3games-previews-hd-mp4/id622679096?mt=22013-05-21T22:37:16.000Z

The next generation of gaming is officially the talk of the gaming world. Microsoft is a part of that conversation, as they’ve announced their next-gen gaming machine — the Xbox One. With a new console, there’s bound to be a new controller.

Here’s what you need to know about this new Xbox gamepad. Check out the video (courtesy of Adam Sessler and Rev3Games) about the controller above.

1. The Xbox One Controller is Kind of Similar to the Xbox 360 Controller

2. The D-Pad Has (Thankfully) Changed

Lots of gamers complain about the stiff D-Pad showcased on the Xbox 360 controller. The classically designed D-Pad now appears as a a plus sign, which will no doubt help gamers perform more accurately when playing sports and fighting games. The official Amazon description page makes note of this new D-Pad:

Newly designed D-pad is perfect for all types of game genres including sports, fighting, FPS, and more. Optimized for both directional and sweeping D-pad movements.

3. Impulse Triggers and A Menu/View Button Have Been Added

Larry Hyrb, the director of programming for the Xbox Live network wrote about the Xbox One’s new impulse triggers for its controller:

Xbox One’s Wireless Controller sports four vibration motors – a small one behind each trigger that adds precise haptic feedback to the fingertips, and a larger in each grip for large scale rumbles. This gives users a sense of in-game directionality and depth, creating rich, immersive experiences where gunshots, car crashes and explosions can come to life.

For example, in “Forza Motorsport 5,” Turn 10 Studios is using impulse triggers to provide players with precise feedback that enhances the racing experience. If your tires break traction from over-acceleration or if you drift on the gas pedal, the triggers emit very distinct vibrations. This is combined with the chassis rumble that conveys impacts, engine roar and driving over surface irregularities like cobblestone.

As for the new Menu and View button, IGN explained the purpose behind these additions:

The Xbox One Controller introduces two new buttons on Xbox where Start and Back appeared on Xbox 360. These buttons are named ‘Menu’ and ‘View’. [n]

Menu: “The Menu button (on the right) will bring up context-specific menus which game and app developers can design to enhance the user experience. The Menu button could be used in scenarios such as bringing up in-game menus, showing video playback options, and accessing commands on the console’s user interface.”

Share this with your friends who are picking up an Xbox One!

4. The Analog Sticks Have Been Improved

The analog sticks have been redesigned to be more accurate and more precise since they’re a bit smaller. Larry Hyrb made sure to highlight how comfortable the new thumbsticks are:

The thumbsticks are built for precision and comfort. They’re smaller and outlined with a knurled texture for better grip. Competitive gamers will be pleased to hear the sticks require 25 percent less force to move, allowing you to adjust your aim in a first-person shooter or execute a half-circle sweep in a fighting game faster and more accurately. The controller also uses advanced electronics that reduce thumbstick deadzone in the center.

5. The Controller Will Turn Itself Off and Charge During Times of Inactive Play

When gamers step away from the controller for an extended period of time, the controller will go to sleep. This Sleep Mode will help preserve the controller’s battery so that it won’t go dead before you even pick it up again. To charge the battery, you can attach the controller to the Xbox One via a mini USB cable. The connectivity feature was also spoken about in Larry Hyrb’s blog feature on the Xbox One controller:

Each controller uses a combination of invisible reflective technology and LEDs to send a patterned infrared signal to your console and Kinect sensor. Not only does this make pairing the devices seamless, but it enables Kinect to associate the controller with whoever is holding it. This introduces innovative experiences, such as player switching, where a split screen display can swap positions on the TV if users change seats on the couch. 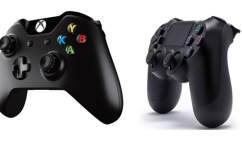 Read More
Games, Microsoft, Xbox, Xbox 360, Xbox One
Here's everything you need to know about the Xbox One's wireless controller.