With Nintendo sitting out on an official E3 2013 presentation, the annual video game conference was a prime battleground for Microsoft and Sony to duke it out with their latest hardware. With the long standing tradition of animosity between Microsoft and Sony fans, this E3 2013 had plenty riding on it, with overall mixed results.

Microsoft’s Xbox One and Sony’s PS4 both had strong outings, although it is generally agreed that Sony had the stronger presentation, capturing the hearts and wallets of many who were tuned into this E3 conference. If you’re wondering which console will provide the superior gaming experience, check out the following comparison points on the Xbox One and PS4.

If you consider that the Xbox One comes with Kinect built in, and that the Playstation Eye needs to be bought separately from the PS4, there isn’t a significant price difference between the two. The cost of entry for either console will be quite high, so a better way to make your decision would be to look at which each will offer you as a full entertainment experience.

While it’s easy to polarize the Xbox One and PS4 into two distinct camps, the two consoles are actually very similar at their core. Both sport x86 octa-core CPUs, and these eight-core processors, located right at the heart of the console, are built by the same chipmaker, AMD.

The use of an AMD processor in the Xbox One and PS4 is a big switch for both Microsoft and Sony.

On the Xbox 360, Microsoft had installed an IBM PowerPC processor, while Sony worked closely with Toshiba and IBM to create its own complex Cell processor. While the Xbox One will run a heavily modified eight-core AMD processor, PS4 will utilize a x86-64 “Jaguar” CPU, making processing speeds between the two consoles ultimately very similar.

Graphics have always been an important mainstay in the life of consoles, and this generation of consoles is no exception. The graphical processing unit, or GPU, of the Xbox One and PS4 are actually both quite similar, with both utilizing a system-on-a-chip design, marrying their AMD CPU’s to their GPU.

This means that both the Xbox One and the PS4 will be capable of a similar graphics quality, leading to not much difference between the graphics of either console.

With motion gaming becoming an increasingly important part of the console experience, Microsoft and Sony are both capitalizing on this by making motion gaming a more integral and financially necessary part of gaming on your TV. During Microsoft’s inital Xbox One announcement on May 21st, the Kinect was referred to as “human control for the human experience.” Playing into that philosophy, the Kinect 2.0 shoots video in 1080p and will have the ability to process 2GB of data per second. Additionally, the Kienct 2.0 will have a 60% wider field of vision that can detect users up to three feet from the sensor, only half of the six feet required for the Xbox 360 version of the Kinect.

Sony has not released much information about the Playstation 4 eye, although they did state that the similar-looking camera bar contains two 1280x800px cameras. Additionally, the Playstation eye will be comptabile with Playstation Move, Sony’s failed answer to Microsoft’s Xbox Kinect.

Apparently black is the new black, as both the Xbox One and the PS4 boast a similar aesthetic. With a combination of angular shapes, black coloring and a matte and gloss finishing, there’s really not much to differentiate the two from an aesthetic standpoint. Rather, both consoles take a cue from Sony’s venerable Playstation 2, the most successful console of all time.

Maybe both companies are trying to imitate, or in the case of Sony, recreate, the success of the PS2, but as of now, there’s not much to differentiate either console from a design standpoint. However, where the real difference comes into play is the number and quality of exclusives , and the continued commitment of Sony and Microsoft to the success of the PS4 and Xbox One respectively. 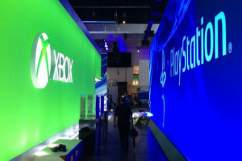 Xbox One Price vs. PS4 Price: 5 Fast Facts You Need to Know

Read More
E3, Games, Microsoft, Nintendo, PS4, Sony, Specs, Xbox One
The Xbox One and PS4 may not be so different after all.