Late night host Conan O’Brien has taken a liking to commenting on video games as of late. Thankfully, his commentary and game reviews are actually comedic and fun to sit through. Conan’s next gaming escapade took place at E3 2013, as he took the time to weigh in on gaming’s most passionate debate – which next-gen console is more superior?

Check out the hilarious vid above. 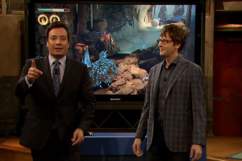