It’s a sad fact, but it’s most certainly a true one – there simply isn’t a lot of video game content that’s currently available on Nintendo’s Wii U console. The big N is looking to remedy this by releasing a sequel to its super bright, real-time strategy video game series – Pikmin 3.

Here’s everything you need to know this impending Wii U summer game release.

Shigeru Miyamoto, Nintendo’s most famous and recognizable video game designer/producer, first hinted at a sequel in the Pikmin series back in 2007. While speaking to IGN, he was quoted as stating:

I certainly don’t think we’ve seen the last of Pikmin. I definitely would like to do something with them, and I think the Wii interface in particular is very well suited to that franchise.

Later on in 2008, CNET.com posted up another interview with Miyamoto that also alluded to Pikmin 3:

For now, Miyamoto looks ahead to other projects for the Wii, mentioning his desire to continue the Pikmin series.

During E3 2008, it was revealed that Pikmin 3 was definitely in the works. Nothing besides that announcement was made during Nintendo’s initial reveal of the game, though. Gamers were left to speculate what new characters, Pikmin creatures and gameplay features were going to become a part of this much-anticipated sequel.

3. The Game Was Moved From the Wii to the Wii U

When E3 2011 rolled around, more news came out about Pikmin 3. Miyamoto revealed that the development of the game moved on from the Wii to the Wii U. Miyamoto’s reasoning for this console move centered on the fact that the game’s HD graphics and the console’s touchscreen were more in touch with Pikmin 3.

During an interview with Kotaku, Miyamoto offered some comments on the development philosophy behind all three Pikmin games:

With Pikmin 1 certainly we had the ideal we were striving for. With that game, I think we ended up with a basic rule set of the game that was a little bit too strict and confining, the 30-day time limit in particular… from that sense it was difficult for people to get into that game, particularly if they were novice gamers.. And, I think the other challenge we had with Pikmin 1 was that people would want to go back and replay the game, but partially because of the limits—the time limit—people just felt it was a bit too much to go back and replay that again.

And, with Pikmin 2, we wanted to focus on really trying to ease the gameplay to a certain degree so that it was easier for people to get into and play so we polished the Pikmin idea a bit but really only focused on how to make it easier to play.

Whereas with Pikmin 3 we’ve really taken it and taken that Pikmin 1 ideal and really tried to bring that to life in a way that encourages replayability all throughout the game.

4. The Plot Centers on the Planet of Koppai

Here’s the official plot synopsis from the game’s Wiki page:

At the far reaches of space lies a planet on the brink of ruin. The planet’s name: Koppai.

Due to a booming population growth, booming appetites, and a basic lack of planning, Koppai’s inhabitants have all but exhausted their food supply. Their only hope is to find another planet with edible matter.

To their dismay, the search is proving fruitless…

…Just as they were about to give up, the final vessel reports back with news of a miraculous discovery!

They mobilize to investigate the planet, which they named PNF-404.

…But, as they initiate the landing sequence, something goes horribly wrong…

Along with the past collection of vastly colored Pikmin creatures, two new Pikmin are being added to the game – the grey Rock Pikmin and the pink Winged Pikmin. The Rock Pikmin have hard bodies that can be used to smash through glass, crystals, ice and larger creatures. These Pikmin can sustain more damage than the other Pikmin on one’s team.

As for the Winged Pikmin, they’re modeled as small creatures with white wings. Those wings allow them to take flight over water, bottomless pits and other ground hazards. They’re also able to carry items in the air, which could prove useful for the game’s many puzzle scenarios.

Pikmin 2 allowed players to control two protagonists. This time however, Pikmin 3 allows a single player to control up to three different Pikmin leaders. All three characters can instantly be switched between during the more complex battle/puzzle situations.

7. A New Multiplayer Mode is Being Added

Pikmin 3’s multiplayer mode primarily focuses on something called “Bingo Battle.” Two players control Alpha and Olimar as they are each given bingo cards that display different items that must be collected. The purpose of this mode is for players to collect the items displayed on the bingo cards so that they can hit the bingo mark. Both players will primarily be collecting items and preventing one another from progressing to a win.

For those wondering, co-op gameplay will also be a part of Pikmin 3.

8. Several Control Methods Can Be Utilized During Gameplay

Pikmin 3’s Wiki page provided some information on the 5 different control methods being offered for teh game:

Wii U Gamepad+TV
With this control scheme, the player can play the game using the gamepad as a controller while using the TV for the game’s display. This control scheme will allow the player to play in a similar fashion to the original Gamecube port of the first game. The HUD will be displayed on the Gamepad’s screen.

Wii U Pro Controller
The Wii U Pro Controller will allow for a more “traditional” feel to controlling the game. It will work the same way as the Gamepad + TV scheme, but the HUD will be displayed on the TV. It will play similar to the GameCube controller from the GCN versions of Pikmin 1 and 2.

Wii Remote Plus+Nunchuk+Gamepad
This control scheme uses the Wii Remote Plus and Nunchuck for motion controls, while the HUD and overhead map is displayed on the Gamepad’s screen. In this scheme, the gamepad acts as a monitor that the player can configure and utilize to better accommodate themselves with the game’s areas.

Wii Remote Plus+Nunchuck
The game’s main controls use the Wii Remote Plus and Nunchuck. The Wii U Gamepad will always display a full overhead map and a HUD, allowing for a less-cluttered screen. Using the precise movements of the Wii Remote Plus, the cursor can be aimed specifically at enemy’s weak points.

Wii U Gamepad
The game can also be played entirely off-screen using only the Wii U GamePad. Using this control scheme, the game can be played in a more mobile, wireless form. The left analog stick can be used to walk while the right one will move the cursor, which will make the gameplay similar to the original Gamecube ports of the first 2 games. Captains can easily be switched around by using the touch screen on the GamePad.

9. The Reviews Have Mostly Been Positive Thus Far

IGN Reviews – Pikmin 3 – ReviewPik of the bunch? Subscribe to IGN's channel for reviews, news, and all things gaming:youtube.com/subscription_center?add_user=ignentertainment2013-07-22T18:25:38.000Z

Several gaming and non-gaming outlets have showered this new Wii release with plenty of praise so far. EuroGamer.net awarded the game with a 9/10. They also gave some thoughts on how fresh this take on the strategy genre feels:

What’s most striking, though, is that Pikmin still feels like strategy seen with fresh eyes – strategy, perhaps, by designers who were unconcerned with labeling, and just let their ideas lead them where they wanted to go. Just as the Koppai explorers give each lump of fruit they encounter its own name (cantaloupes become Wayward Moons, limes are reborn as Zest Bombs), Nintendo has transformed a genre traditionally concerned with large-scale warfare into a knee-high epic built of scavenging and babysitting. Survival, not domination. Family, not factions.

GamesRadar.com graded the game with a 4.5/5. They spoke about how right it feels on the a system such as the Wii U:

Pikmin 3 is a game about nature, just as it always has been. But on Wii U it’s so believable it often feels like you’re sitting in a real garden, playing with ants and beetles in dappled sunlight. Despite the macabre undertones of the cruelty of nature, the game is charming, funny, and utterly captivating. It is without doubt yet another Miyamoto masterpiece, and one that the Wii U desperately needs.

10. The Game’s Being Released on The Weekend in Different Territories

It turns out that Pikmin 3 has already been released in Japan (July 13, 2013). As for other territories, here’s the official release dates: 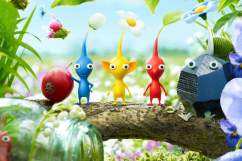 Pikmin 3: Game Trailers and Gameplay Videos You Need to See

Read More
Games, Nintendo, Nintendo Wii U, Pikmin 3, Top 10, Wii U
Pikmin 3 is the Wii U summer release that should hold owners over 'till 2014.