Nun Attack prides itself for having one of the wildest (and probably unabashedly offensive) video game concepts out there – NUNS WITH GUNS! Four hardcore nuns run around on a battlefield sporting firearms while blasting the Fallen Nun’s evil followers.

There’s plenty of run ‘n gun action spread throughout this wild mobile shoot ’em up. We’re going to make sure your nuns are outfitted with the best weaponry and get you through those tough-to-pass levels. Here are the top 10 tips, tricks and cheat you need to know.

Wanna know how to take advantage of the Android version for extra money? Then watch the video below:

1. Equip Your Guns With the Right Effects

Each gun in the game comes stacked with various status effects that will make your enemies feel the pain. In our opinion, it’s best to take advantage of these abilities – poison, stun, slow, knockback, fear and charm. For self explanatory reasons, these abilities go further towards clipping away at your enemies’ health, slow them down to a manageable pace etc. As for the other status ailments (shock,freeze, burn, DOT, AoE, fear and charm), they come in handy too.

2. Protect Yourself from Incoming Projectiles

When your active in the game’s overworld, incoming projectiles will come flying your way FROM OUTTA NOWHERE! Here’s a simple trick that should keep you alive – just swipe ’em away on you smartphone’s/PS Vita touchscreen. PROBLEM SOLVED!

This in-game trophy/achievement can be obtained by gathering a cumulative amount of coins. Since PS3Trophies.com played the PS Vita version to death, here’s there tip guide on getting some more coins:

This amount is cumulative and seems like much more than it really is. By the time you reach the fourth map you can earn roughly 75,000 per mission if you go through all the sub-battles in it. If you don’t have this by the end of the game, you should be very close. Most of your money earned will come when you kill an enemy. Make sure to tap the money pile that drops on the ground after killing an enemy to collect it or it will disappear. You will also earn a bonus money for earning a gold rating in a level. This is a one time bonus. You can also use the Vita’s Near option to send and receive cash gifts for the game to nearby players. If you’re lucky and have players using this option, it can give you a nice boost when you start the game but isn’t all that necessary.

4. There Are 7 Miracles You’ll Need to Unlock

As you run ‘n gun through hundreds of evil demon hordes and skeletons, you’ll come to unlock miracles as you beat bosses and unearth golden treasure chests. Here’s all the miracles you’ll need to know about:

5. Aim for Leveling Up One Nun to The Max Level

You may have four nuns at your disposal, but try and get one to the max level of 15. We prefer Eva and Olga over the other two nuns, so we made sure to get them to level 15 ASAP. Note – any of the experience you earn from a sub-battle will still be gained even if you fail the main mission.

6. So How About Those Special Chests?

Special chests are marked as golden canisters you’ll see throughout your play time. These chest contain miracles, better guns and definitely coins. By walking into these chests, your nuns will be healed as they make their way into the chest’s inner level. Sometimes you’ll have to complete a few sub-battles/boss portals in order to get your hands on those special chests. Trust us – they’re well worth it.

7. Here’s The Full Listing of Everything That’s in the Game

There’s a bunch of things you’ll need to know about this game, statistics wise. Check out the list below for the total of each feature you’ll encounter in Nun Attack:

8. Here’s How to Take Down the Final Boss

PS3Trophies.com also posted up some details on how to take down the game’s final boss, Mortanna:

Once you reach Mortanna, she will attack you relentlessly with a barrage of physical attacks and energy bolts she shoots out. Occasionally she will grow a tail that whips out and hits your characters as well. When she disappears off the screen, a rain of fireballs will come down and do a lot of damage. When this happens is when you want to use your Shield of Faith miracle to dampen the damage taken. Keep your characters spread out so they all don’t take damage at once and don’t waste any time with offensive miracles. You will need to spend all your time healing and resurrecting your characters. A lot. After each round of fire rain, Mortanna’s health will restore a decent amount but if you keep all your characters alive it will only take 1-2 minutes to kill her. Other than that, just keep firing at her when she is on screen and make full use of all your characters special powers.

It pays to be extra violent every once in a while when it comes to Nun Attack. Thanks to the game’s latest update, there’s a way to unlock the most powerful firearm in the game. Just throw a few bucks at the Rent-A-Gun feature and you’ll be leaving a trail of downed baddies in your wake.

GameRankings.com made sure to list all the bronze and silver trophies you’ll need to unlock in the game:

If you have any extra tips and cheats you’d like to contribute to fellow Nun Attack players, throw them in the comments section! 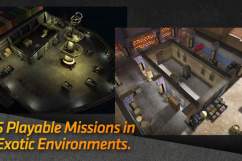 Breach and Clear: Top 10 Tips and Cheats You Need to Know