Instead of focusing on the trials and tribulations of one main protagonist (antagonist?), you’ll get to follow three of them. Michael’s an unhappy, retired crime vet who happens to have tons of money in the bank. His money doesn’t lend itself well to a happy family situation, though. Franklin’s a street hustler who has ambitions of grandeur. He’s tired of pulling off easy scores and is ready to bank on some bigger opportunities. Trevor, the whacked out, Meth addict with dubious business relations, is always ready to make it big.

Through some random occurrences and past relationships, all three individuals eventually become a well-oiled bank robbing machine. It’s easy to become emotionally invested in the overall plot trappings of each character and all of them as a group. Michael operates off of a cool demeanor, Franklin’s a bit more amped yet still adds to the team as the voice of reason and Trevor is an insane SOB that’s entertaining as hell to watch. The supporting cast is just as pleasing to follow as the characters you’ll directly control. You’ll surely elicit a laugh as Franklin and his best friend Lamar constantly insult each other and remain tight during their petty crime setup’s. Michael’s son Jimmy is an hilarious representation of suburban White kids who try so hard to be “down.”

Rockstar’s satirical nature is front and center once again. You’ll come across popular items and TV shows that humans can’t live without in the real world, then elicit a chuckle as you see them depicted with a more truthful (and harmful) description. The American Dream gets ripped to shreds here by the game’s plot, which offers a stark and more realistic reality of what it takes to make it in the States.

You probably already know this, but it needs to be stated anyway – Los Santos looks amazing. The towering buildings, neon night life, active city denizens, super fast sports cars etc. all lend a overwhelming feeling of interacting with a living, breathing world. Los Santos contains a healthy mix of mountains, military bases, airports, deserts, oceans etc. that all look incredible. Graphical hiccups pop up from time to time (texture loading, environmental glitches etc.), which tend to take disrupt your immersive experience. The strong gameplay and seemingly unlimited mix of main/side missions will keep you distracted from all those issues, though.

The audio’s strengths lie in its incredible voice acting and music collection. The radio stations all offer a great mix of current rap/hip-hop, old school pop music and reggae tunes, 80’s/90’s metal etc. Listening to the main characters converse, hearing the road rage of pissed off drivers and picking up the random ramblings of a drunken hobo make the game’s audio aspects even stronger. Los Santos feels and sounds alive.

The familiar third-person gameplay of past GTA’s is just as strong as ever for this entry. Each character has the basic abilities that will get you through every mission thrown your way – running, shooting, driving vehicles, melee, stealth etc. Michael, Franklin and Trevor differ in the special abilities that set them up perfectly for different situations. Michael’s slow-mo bullet time, Franklin’s slow-mo driving and Trevor’s rage mode are all worth investing in. Each character can also be fully upgraded and outfitted with anything you’d like to dress them in.

You’ll spend the majority of your time in Los Santos driving around, engaging in main/optional missions, hanging out with friends or randomly causing some carnage. There’s never a dull moment in the game, since there’s so much to do and see. You can kill some time and play a cool round of golf/tennis, pick up vehicles for some tow truck responsibilities or search for alien spaceship parts (seriously!). Random missions that are integral to the day/night cycle leads to players engaging in even more awesome side activities. If you’re a car nut, then there’s evening car races for you to conquer. You’ll never have nothing to do in GTA 5.

The strongest gameplay mechanic of GTA 5 is also its newest one – bank heists. Planning these huge missions will test your planning expertise as you put together a top-notch (or cheap labor) squad of bank robbers. Moments of joy, fear, frustration and excitement will occur as you try to conduct the perfect heist. Switching your focus between all three characters provides you with a different outlook of the situation at hand, which helps freshen up the mood and experience of it all. The game’s most cinematic moments and varied gameplay mechanics all equate to the right mix for these action-packed heists.

GTA 5’s main campaign is worth investing in, but players can divert from it entirely. There’s a staggering amount of methods that will grant you more cash, make your stats better, upgrade your cars etc. If you’re not interested in the main storyline, then you have the freedom to just live your life the way you see fit. The always great controls of the series returns here, so riding bikes up a mountain and pulling of drive-by’s never feels off. Getting acquainted with everything Los Santos has to offer won’t be a chore, since controlling your character’s trigger finger or his custom ride never becomes an issue.

GTA 5 is a game that every gamer has to experience. The amount of things you can do may seem overwhelming, but the completionist in you will push you to do it all. The replay factor is off the charts. Thankfully, all the awesome aspects of GTA 5 will keep you involved for the long haul.

Grand Theft Auto 5 combines every aspect of Rockstar Games’ strong catalog – a huge, open world that’s full of life and a long list of side activities to lose some time in. An amazing storyline that features a strong narrative and a cast of characters that put on a strong performance. And finally, an addictive mix of awesome gameplay scenarios and a great set of visuals to back them up. This release does everything GTA fans expected, plus more. This may just stand as the strongest video game experience of 2013. 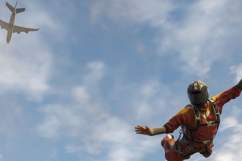 Grand Theft Auto 5: Watch Some of the Crazy Side Activities You Can Do in Los Santos