When you hear the word twerking, her name immediately pops up (for better or for worse). She’s taken over the world of entertainment through her various antics on TV and all over the internet. She’s twerked her bu…well, spine at Juicy J concerts. She’s sung on top of a cannonball completely naked. And she gave the most memorable performance at 2013’s MTV VMA Awards.

So now that Miley’s fame has gained a new high, plenty of other media opportunities have propped up for the ass-less pop star. Alwin van der Velden has done something with Miley Cyrus’ likeness that we’re not surprised to see – a Miley Cyrus video game. Yes, we’re totally not kidding.

If you’re dying to get your twerk on, then head HERE and play it for yourself. If you want some more background info on the game and its developers, check out our interview with Alwin van der Velden below.

Elton Jones: 1. So what’s the whole premise behind your Miley Cyrus game?

Alwin van der Velden: People seem to have a constant craving for Miley news, so we thought it would be a fun thing to do.

EJ: 2. What was the main inspiration behind the creation of this game?

AV: We were fascinated by the reactions after the Miley Cyrus performance at the VMA’s. Even more by the amount of gossip and news items that keep on being published. Also, we saw some other simple games about Miley but those didn’t really have a lot to do with what actually happened, so we wanted to simulate the actual twerking experience.

EJ: 3. How long did it take you and your friend to develop it?

EJ: 4. Have you developed any other games?

AV: No, but we do intend to do this more often. This game was relatively simple and got a lot of positive attention. Our next game will be more advanced. It’s great to entertain people with games about news they love.

EJ: 5. How has the public responded to the game since its been released?

AV: We’ve published the game on our global game portal and it is played massively in the 30+ countries we launched it. Twitter reactions are really enthusiastic, which is funny and great to see!

EJ: 6. How surprised are you by the game’s popularity in Brazil?

AV: We are not that surprised. Brazilian people/woman simply love to dance and like butts. Now let’s see how the rest of the world reacts ;).

AV: She’s conquering the world in her own unique way. It’s inspiring.

EJ: 8. Are you a fan of the newfound twerking phenomenon?

AV: We find it really interesting to see something like this going viral and being spread worldwide. And of course, we are guys, so which guy doesn’t like a girls butt twerking around ;).

EJ: 9. Do you plan on upgrading your Miley Cyrus game for the foreseeable future?

AV: If the success continues we might consider a Miley Cyrus follow-up, who doesn’t want to see her swinging that Wrecking Ball from the video clip?

EJ: 10. Can we look forward to seeing a game that lets us twerk with our favorite female celebrities? How about “Nicki Minaj’s Starships Twerk-A-Thon?”

AV: That sounds awesome! Although we already have some other celebrities in mind that caught our attention, so stay tuned!

By the way, you guys totally have to read the official description of the game below:

Dance in a controversial way at the MTV awards show! Miley Cyrus’s manager wants her to rub circles over Robin Thicke’s crotch. Follow the yellow circle to bust a move and shock the audience. Draw perfect circles, shock all celebrities and fill the ‘Scandal Meter’ as fast as you can! 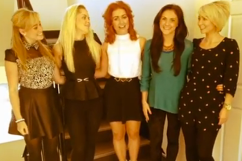