Dragon Realms is a new RPG developed by GREE. The company has gained recognition by launching popular mobile games such as Knights & Dragons, Kingdom Age, Modern War, and Monster Quest. These games have received positive feedback from both critics and gamers for developing compelling RPG and strategy games on iOS and Android. Similar to Knights and Dragons, Dragon Realms throws players in a world of swords and magic, progressing through battles while building up their characters. Unlike their previous game, Dragon Realms immerses players in a more visceral experience, providing a darker atmosphere than the prior counterpart.

Upon launching the game for the first time, players will need to complete a tutorial before the game actually begins. The tutorial walks through some high-level important aspects to the gameplay, lasting about 5 minutes. Once the tutorial is complete, players will receive $13 worth of rewards including premium hero’s summon x2, 1,5000 gold coins, Sm. Energy Potion x3, and sSm. Stamina Potion.

Players will need to choose between The Silver Alliance, The Feral Horde, and the Undead Legion to take control of the Dragon Realms. Once a leader is selected, players will be thrown into a realm to battle powerful dragons and mythical monsters. To defeat enemies, players simply double tap on the desired enemy. The more battles won, the more money and experience players can receive, which will level up and upgrade characters. In addition to character upgrades, players can also build towns by purchasing property with the money earned. Either grinding or adding more money via microtransactions is the key to success in Dragon Realms as it quickly allows players to upgrade buildings, weapons, and army of heroes.

In addition to personal quests, players can also create their own guild and invite friends, or request to access guild quests created by other players. Guilds allow players to join forces with other players for guild-specific quests that truly open up the world of Dragon Realms.

Overall, Dragon Realms is a decent western RPG for the iOS and Android platforms. I highly recommend playing the game on a tablet, such as iPad or Nexus 7 where the graphics truly shine and create an immersive and visceral experience for players. While this game may not have the depth and visual experience compared to some of Square Enix’s JRPG mobile offerings or the experience of ports such as Baldur’s Gate or Knights of the Old Republic, Dragon Realms still provides an engaging mobile western RPG experience. Best of all, it is free, but be prepared to grind if you’re not ready to invest in a few microtransactions.

Dragon Realms is available for free on the App Store and Google Play. 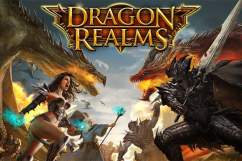