The Xbox One is launching with a few exclusive video games that will cater to certain types of gamers. For those gamers who crave all out warfare and epic clashes between Roman soldiers, then this game might be on your launch day purchase list – Ryse: Son of Rome. There’s a bunch of things tied to this next-gen action/adventure game that you need to know.

Luckily for you, we’re going to list the most important details. Make sure you’re well prepared for this massive action adventure from the the developers at Crytek and the publishing giants at Microsoft Studios.

These are the top 10 facts you need to know about Ryse: Son of Rome.

Ryse: Son of Rome made its initial debut during Microsoft’s press conference at the 2011 edition of the Electronic Entertainment Expo. The game was presented as an Xbox 360 exclusive title that primarily worked with the Kinect motion sensor. The pre-rendered trailer displayed pre-rendered gameplay that displayed the motion-focused gameplay and Roman scenery. You can check out that E3 2011 trailer above.

2. It Was First Designed as a Kinect-Only Game

Ryse was originally designed to work as a Kinect-only game that allowed players to enter combat and perform different gladiatorial finishing moves through their actual motions. Back in June 2012, corporate vice president of Microsoft Studios Phil Spencer offered this response when asked if the game was still a Kinect title – “Kinect will be a part of the game, absolutely.” This comment led gamers to reason that the game would no longer be a Kinect-focused title that would only offer partial connectivity with the motion sensor. Gamers then went on to speculate that the game was now being prepped as a “Better with Kinect” Xbox 360 title.

3. It Was Later Announced as a Xbox One Exclusive

Back in May 2013, Ryse was announced as an Xbox One exclusive that would be launching with Microsoft’s next-gen gaming machine. During the June 2013 E3 Microsoft Conference, a gameplay video for the game showcased the new look and combat mechanics of this new version. The new gameplay was revealed to no longer rely solely on Kinect, since teh active combat will work primarily with the Xbox One controller. Instead, the Kinect will be used to offer voice commands that will used to direct the squad used during war scenarios.

Here’s the official synopsis of the Kinect features for the game from Crytek’s offical website:

Command and fight with Kinect for Xbox One. Optional voice commands allow players to direct attacks and encourage their troops, while motivational cries can turn the tide of a mass battle by rallying troops or focusing attacks. Physical gestures can be used in combination with (or instead of) button presses to launch ranged weapons, or to block with your shield.

4. It’s Designed as an Action/Adventure Game

Ryse is a traditional action/adventure title that takes place during the reign of the Roman Empire. Check out the offical overview of the game from Crytek’s official website:

Action, adventure and Brutal Realism: Experience a cinematic adventure that leads you deep into the dramatic world of the Roman Empire. The brutality and intensity of Roman warfare are brought to life in visceral detail, thrusting the player into the chaos of close-quarters combat. See and feel the emotion on your opponent’s face! Players have to master sophisticated sword and shield combat techniques to vary attacks and manage multiple enemies, and then finish foes with one of over a hundred brutal final executions.

5. A Co-Op Multiplayer Mode is Present

Next to the single-player gameplay, co-op multiplayer gameplay is also available in the game. Two local players can enter into a gladiator arena setting, where they have the ability to cut down a wide swath of enemies. If you’ve played any Horde Mode from various games, then you’ll know what to look forward to in Ryse’s co-op mode.

During an interview with Crytek producer Michael Read on 3News.co.nz, Read offered some info on how the single-player campaign has influenced the co-op gameplay:

Then with multiplayer, that’s taken a lot from the single-player in terms of the combat, but put it into a multiplayer environment in an arena, and changed some of the systems. So you choose gods for instance, and are able to buy potions and customize and so on. So there’s two sides to it, I think most people will probably play through one and then jump over and play the other. We have pretty solid replayability with both single-player and the multiplayer. By using the left bumper you can showboat between waves of enemies, there’s some funny quotes and stuff in there to keep the crowd entertained. And then of course how well your combat is going also keeps them entertained. Are you taking guys out? Are you performing big executions? The better and longer you keep them entertained, the more bonus currency you get out of that, which can be spent on various items for multiplayer.

6. A Competitive Multiplayer Mode was Scrapped from the Final Version

It turns out that the game was once being planned to feature a competitive multiplayer mode. But, as evidenced by the comments offered by Michael Read to 3News.co.nz, the mode was scrapped:

We looked into various multiplayer modes throughout the course of the project and one of them was a PvP mode. It really did not work out very well. It just wasn’t very fun. We went back and forth with various systems on how to take the timing-based combat with slow-motion out of it. It’s easy in single-player, but bringing in a second player, a second camera, and watching that from a third-party perspective, was just too difficult. The co-op is very fluid now, but that was a challenge and for PvP it just didn’t work.

7. Several Kill Animations are a Part of the Game’s Combat

Finishing moves are a big part of action/adventure games, so it’s expected that Ryse includes some gruesome kill animations. Michael Read explained why this mode wasn’t possible for the final version of the game:

We looked into various multiplayer modes throughout the course of the project and one of them was a PvP mode. It really did not work out very well. It just wasn’t very fun. We went back and forth with various systems on how to take the timing-based combat with slow-motion out of it. It’s easy in single-player, but bringing in a second player, a second camera, and watching that from a third-party perspective, was just too difficult. The co-op is very fluid now, but that was a challenge and for PvP it just didn’t work.

8. The Plot Revolves Around A Roman General Names Marius Titus

The story of Ryse focuses a young Roman soldier who goes by the name of Marius Titus. Here’s the official story bio of the game straight from Crytek’s website:

Embark on a journey of revenge, betrayal and divine intervention: Ryse: Son of Rome tells the story of Marius Titus, a young Roman soldier who witnesses the murder of his family at the hands of barbarian bandits, then travels with the Roman army to Britannia to seek revenge. Quickly rising through the ranks, Marius must become a leader of men and defender of the Empire on his quest to exact vengeance – a destiny he soon discovers can only be fulfilled much closer to home.

9. A Web Series is Being Teased for the Game

It looks like a web series is being planned for Ryse: Son of Rome. The image below may provides some evidence of this actually being true:

The trailer is now live. Check it out below:

10. The Game is Launching Alongside the Xbox One; A Day One Edition is Hitting Stores, Too

Ryse: Son of Rome is a launch title that will be available on day one with the Xbox One. A Day One edition for the game (which is retailing for $59.99) will come with a host of exclusive items. Check out those items below, which are now being displayed and sold through Amazon:

Here’s some details on the game’s Season Pass extras, too. Purchasing this season pass ($19.99, with a 25-percent discount) will give players a sweet deal on all the game’s post-launch DLC:

EXTRA: Check out this sweet cover pic of the game below! 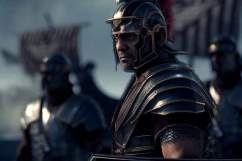 Ryse: Son of Rome: Game Trailers and Gameplay Videos You Need To See