Crimson Dragon is pretty easy to compare to another dragon-rider themed video game series – Panzer Dragoon. This Xbox One launch game is discernible from that awesome Sega originated series through its plot workings. An entire civilization from Earth are successful in their colonization attempts on a planet named Draco. This alien habitat is packed with a wide variety of dragons, which are utilized by these former Earth dwellers in their attempts to explore planet Draco.

You take control of a young dragon rider who has to contend with a massive creature that endangers his race of people. This gigantic creature, the White Phantom, has the immense power that could be the downfall of the new group of people living on planet Draco. After encountering the White Phantom during a routine search in an underground tavern, this rookie dragon rider is tasked with ridding planet Draco of this planetary menace. The overall story is nothing memorable, so getting invested in your character and the overall battle against the White Phantom is something you probably won’t be doing.

Crimson Dragon and its graphical fidelity shines in the environmental presentation. You’ll tame your dragon and fly through underground caverns littered with hot lava, sky-blue locales that’s lined with all sorts of eye-popping scenery and many more colorful locations. Each of the dragons you’ll come to master all look great, thanks to their menacing faces and detailed scaly skin texture. As you move throughout all of the different otherworldly stages that make up the bulk of your adventure, you may be in awe at the screen-filling bosses and large gathering of enemy formations.

Crimson Dragon certainly looks good, but it doesn’t quite look like the next-gen graphical showcase that some are expecting. Considering that the fact this title was once an Xbox 360 Kinect title, it’s surprising that the move over the Xbox One didn’t fully improve the visuals. The game’s orchestral tunes set the mood perfectly for the huge battles and climactic story moments. You’ll no doubt want to mute the vocal performances of the game’s cast, though. It can be likened to the vocal talents of unknown voice actors who are working on the type of film you’ll spot in a Wal-Mart bargain bin.

On-rails shooters are usually filled with insane bullet-hell gameplay and nail-biting maneuvering. Crimson Dragon’s gameplay elements contain those mechanics, but a few things hurt the appeal that other on-rails shooters host. You take control of your rookie dragon rider and the dragon that’s the main star of this release. You’ll take flight and blast evil alien denizens out of the sky with lock-on fire blasts and more varied weaponry attachments. Two modes of difficulty (Casual and Classic) offer a less-strenuous experience and a traditional SHMUP that’s packed with wild action. The obligatory dodge button is here to make those tougher battle encounters less of a headache.

After a few stages, the appeal of the shoot ’em up gameplay starts to lose its luster. You’ll be performing the same actions over and over through each level – shooting, locking-on to baddies with more devastating attacks and dodging the hazardous elements coming your way. The various missions that pop up during each stage and the addition of flying through golden beacons for more points changes up the gameplay flow at times. The recycled environments and enemy patterns do get old after a while, which leads to that defeating feeling of boring repetition. Even though there are instances where you can take your dragon off the beaten path and fly freely, you’ll quickly find yourself working the same types of stage structure once again.

Crimson Dragon is deeper than one might think, though. There’s a whole collection of dragons to customize to your liking. You can apply all sorts of attacks to their repertoire, feed them certain items to increase their experience and even alter their breed if you’re looking to produce an entirely new sky rider. Working on your dragons becomes one of the more positive features of the game, but controlling them tends to feel a bit off thanks to the shaky camera. If you can grow comfortable with the somewhat unwieldy camera, then you’ll find some satisfaction in taking your experienced dragons into battle. For everyone else, the camera may spoil your overall play time with Crimson Dragon.

At the end of it all, this Xbox One launch title is fine for what it is. But too many negative factors keep the gameplay from being as memorable and approachable as the Panzer Dragoon games.

Crimson Dragon gets by on its passable gameplay elements and decent graphical fidelity that’s displayed through its many stage settings. What’s disappointing about this dragon-themed action/adventure is its repetitive nature, under-performing “next-gen” visuals and lack of lasting character. You’ll have some fun passing the time with this rail shooter, but once you’re done with it…you’re done with it forever. 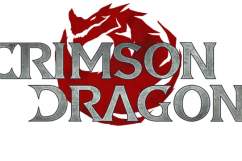