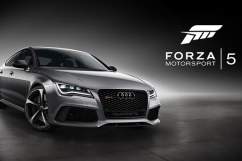 Racing simulators tend to look phenomenal these days. The current-generation of racing games that litter the PS3/Xbox 360/PC landscape all push the graphical boundaries of each console. The Xbox brand has played host to the rival counterpart to PlayStation’s Gran Turismo series – Forza Motorsport 5. The Xbox One is a powerful machine that pushes the visual output of video games to an unprecedented level. Forza Motorsport 5 stands above the rest of the current racing game pack with its super photo realistic graphics.

The visuals shine brightest for this fifth main entry in this Xbox One exclusive racer. Everything, from the manufactured rides to the real world tracks, could be mistaken for a live telecast of a racing event. Tuner heads will get what they came for once they lay eyes on all the available vehicles up for sale. You want a Land Rover licensed vehicle? You’ll have no problem finding it here. Fans of current car models have much to look forward to (the McLaren P1, for instance). The car manufacturers that are known worldwide probably offer their high-class vehicles for your in-game garage – Ferrari’s, BMW’s, Nissan’s etc. There’s 200 cars and future DLC rides releasing in future updates? Yep, which means there’s something here for everybody.

The cars look great without question. The series trademark Autovista mode (where you can take a more detailed look at your purchased cars) solidifies every automobile’s quality appearance. The return of custom paint jobs for each car lends a sense of one’s personality to them all. When it’s time for you to head out onto the track, the graphics don’t take a hit whatsoever. You’ll marvel at how true to life many of the in-game tracks look. The Top Gear Test Track, Le Mans, Laguna Seca etc. all look amazing. The exclusion of the Nurburgring motorsport track will disappoint true racing enthusiasts, though.

While you’re on these beautiful tracks, you’ll make contact with a slew of rival racers from time to time. The car damage isn’t as extreme as you may want it to be. Smashing into the side of a barricade will add nothing more than a few visible scratches on your current ride. There are in-game modifiers that allow you to increase/decrease the visible damage on your rides. You won’t see too many horribly mangled cars during gameplay, though.

Forza Motorsport 5’s audio is just as close to real life as its graphics. The roar of the engines, the screeching tires and the bumper to bumper crashes sound comparable to how they sound in real life. Having a female narrator on hand to explain the basics of the game is a nice touch, too. Top Gear fans will also be happy to hear Jeremy Clarkson’s insight into all the different cars and the track locales you’ll be heading into.

So the game looks incredible. But how does it play? It plays like a dream. Each ride you select reflects its appearance in the way it controls. For example, the smaller more compact modern sportscars are just as fast as you imagined them being. Keeping your car on the track will entail a mixture of hitting the gas, braking at tight turns and staying tuned into the suggested lane arrows on the road. Expert players who’re more familiar with Forza’s mechanics can ratchet up the difficulty by turning off the road assists as well. Beginner and expert racers will get an equal amount of joy from every lap run.

The usual single-player campaign that Forza is known for returns here. Each vehicle class can be taken into a specific Championship Series. Each Championship Series comes with a wide variety of challenges, such as lap-based races or one-on-one rival encounters. The replayability of each series increases as you wield special car classes that qualify you for certain races. There’s no overwhelming need to place in first place on every race, since credits are awarded for players who place at certain placings. But getting into the top position as you cross the finish line is still a task worth completing. The better you place, the more credits you’ll earn. This racer feels more rewarding for all players of all different skill levels.

Credits are easy to come by if you consistently place high enough. If you’re really itching to cop a super expensive ride, then you might end up spending some real money on tokens. These tokens soon become a crutch that you may become attached to. The more expensive cars you’ll spot go as high as the millions. Deciding between spending your credits on new cars or using it to fix your cars is an issue that you’ll constantly face. This problem will rear its ugly head at several intervals of the game, which hurts the overall experience at times. Spending real world money on tokens is beneficial for timed experience boosters if you want them, so this use of the token system feels a lot better to invest in.

Forza 5 is a game that constantly gives you experience for all your in-game actions. The new Drivatar mechanic is proof of that. As you race offline, your driving behavior gets uploaded to a cloud service. When you reach a certain level, your A.I. controlled Drivatar will show up in other players’ games and pocket credits for you even when you’re not playing. Every racer you compete against during the campaign are also Drivatar models, so you’ll definitively feel like you’ve earned each victory.

You’ll grow accustomed to upgrading your rides and completing races during the solo campaign portion. The multiplayer offerings are just as worthwhile as the single-player one’s. 16-player races, event hoppers and private lobby setups set the gamut for your online racing needs. Local play is also available for those racers who prefer to compete offline. Interacting with the Forza community at large is something you should most certainlylook into. A wealth of cool custom car pain jobs and replay videos await you. Forza Motorsport 5 can be defined in one simple term – feature rich. There’s so much to do and see.

Forza Motorsport 5 excels in so many departments. The graphics shine, the cars control just as well as their real-world counterparts and the single-player campaign and multiplayer modes provide a tightly tuned experience. The slow crawl towards getting the credits needed to purchase more lucrative rides can frustrate players during their solo racing exploits, though. Nevertheless, Forza Motorsprt 5 is still one of the best racing simulators on the market today.