One of the freshest and most anticipated launch games for the PS4 is the action/adventure platformer simply titled Knack. The main character (who is unsurprisingly named Knack) stands front and center as the game’s main character.

PS4 owners will most certainly need something brand new and fresh to play once they have Sony’s new console in their living rooms. This release not only marks the early origins of a new Sony PlayStation franchise, but the makings of a new platforming hero that could become the face of the PS4.

Here’s the top 10 facts you need to know about Knack.

1. It Was Revealed During the 2013 NYC PlayStation Meeting

Knack was first shown to the public during the 2013 NYC PlayStation Meeting event. Longtime video game developer Mark Cerny came out on stage to showcase this new title as one of the PS4’s upcoming launch titles. Knack holds one of the special distinctions of being the first PS4 gameplay that was on display.

To see what was shown during the NYC 2013 PlayStation conference, refer to the video above.

2. Video Game Designer/Programmer/Producer Mark Cerny is Helping with the Development of the Game

One of the bigger names associated with this new PS4 project is renowned video game designer/programmer/producer/business executive Mark Cerny. Cerny developed the game along with the creative development team known as Sony Computer Entertainment Japan Studio. While Cerny is handling the directing duties for Knack, Yusuke Watanabe is working as the game’s main producer.

Mark Cerny’s video game track record speaks volumes about his talent in the industry. Check out some of the games he’s worked on below:

3. The Main Character is a Creature That’s Constructed of Ancient Relics

The on-screen avatar that players will primarily be controlling is a miniature creature named Knack. Knack’s molecular structure is primarily made up of ancient relics that were discovered by a human doctor. Knack has the ability to become larger as he defeats foes and collects even more scattered relics through the game world.

Mark Cerny spoke with OfficialPlayStationMagazine.co.UK about the inspiration behind Knack’s fragmented body physics:

The original concept was that we wanted [to appeal to] two audiences. We wanted the feeling of nostalgia, but also something for the light gamers – something where pretty much anybody could pick it up and play it, regardless of whether they played games regularly or not. I think it’s nice if there are games that are that accessible on the easy setting. As far as the character goes, we were looking for an international audience. If you have a character like we used to make back in the day ­– Crash, Jak, Ratchet, Spyro, Sonic – those tend to look like American characters, or Japanese characters. They have a country of origin. That means that in some countries it’s going to feel like something foreign coming in. We wanted something that was a bit more international in feel. So we thought, ‘Hey let’s have a character that’s really a special effect. Let’s have a character that can pick up things from the environment and grow.’ As it turns out, that was quite difficult to implement. It took about a year and a half to get from that concept to the character of Knack you see today.

4. The Plot Focuses on a War Between Humans and Goblins

The main plot for Knack focuses on a war that’s being fought between a gang of Goblins (led by a goblin named Gundahar) and the human race. Knack is being used as the primary weapon by the humans to combat the Goblin invasion and uprising.

Here’s the official description of the game from Knack’s official website:

Mankind must turn to Knack, an unlikely hero, to protect them from a dangerous new threat. The unassuming Knack stands at a mere three feet tall, but thanks to the power of mysterious ancient relics, he can transform into a powerful brute or even a gigantic wrecking machine. Knack is mankind’s only hope for turning the tide against the invading goblin army, but trying to harness the true power of the relics could threaten to put the whole world at risk.

5. It Primarily Works as an Action/Adventure Game with Platforming Elements

Knack contains elements of action/adventure and platforming gameplay. The game is aid to be a mix of other popular games in the genre such as Crash Bandicoot, Katamari Damacy and God of War.

Mark Cerny provided some comments to the offical European PlayStation blog about the game many gameplay styles:

Each level is a different variation on the theme of “Here’s this character who has this ‘knack’ that lets him grow and transform.” In some levels he’ll slowly grow, and in other levels he get big really fast – by picking up icicles for example — but then if he goes out into the sun he’ll melt down quickly.

The way I look at it – there’s a bit of Crash Bandicoot in there, a bit of Katamari Damacy, which is a game I love and must have bought three or four times over the years. And there’s a bit of God of War too. You can see that game’s influence on Knack – especially in the control set, where the right stick is the dodge. Actually God of War 3 was one of my consulting projects!

For players who want to go the local co-op route, Knack does offer that enticing option. Remote play features are also a part of the game, which allows players to play on their own screen. For instance, one player can play on the PS4 while another players joins the fray by playing the PS Vita device. Check out what you and a friend can do in the video trailer above.

And for even more gameplay action that displays the co-op mechanics of Knack, refer to the vid below:

7. There’s a 15-Minute Gameplay Vid That Shows Off the Best Parts of the Game

For a real extensive look at all the gameplay aspects that Knack offers, check out IGN’s 15-minute gameplay demo video above.

8. The Cinematic Sequences All Equal Up to 90 Minutes of Cutscenes

Knack will offer plenty of action-centered stages, but it also showcases its Pixar-like graphics through the use of cinematic scenes. For players wondering the total time of cutscenes that will be offered in the game, here’s your answer – 90 minutes.

9. A Knack/PS4 Bundle Is Available

There’s a PS4/Knack bundle being offered at the moment. GameStop lists the package deal for the console-launch game at the price of $519.97.

10. It’s Been Released Before the PS4 Launch

If you’re pretty impatient and you’re already looking to procure a new copy of the game, you’re in luck. Knack actually went on a sale a bit early on November 5, 2013. For $59.99, this PS4 launch title can be yours! Now you just have to wait until you actually get to play it. The PS4 countdown is almost over… 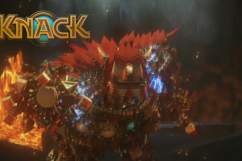 Knack: Game Trailers and Gameplay Videos You Need to See