The Tokyo Game Show 2013 is preparing to go down on September 19-22, 2013 and it can be compared to Japan’s version of the celebrated Electronic Entertainment Expo. Sony went ahead and conducted a pre-TGS 2013 press conference that showcased a large variety of the hardware/software company’s product lineup.

Check out the best bits of Sony’s pre-TGS 2013 press conference below to get a look at the PS4/PS Vita’s synced features, the fresh slim PS Vita model and the new PS Vita TV:

A Day With PlayStation

PS Vita TV 'Reveal Presentation' TRUE-HD QUALITY►► Remember to select 720p HD◄◄ PS Vita TV is a tiny piece of hardware. It's about as big as a deck of cards, measuring 6cm by 10cm. It's the smallest PlayStation hardware ever. The idea of PS Vita TV is to let you play Vita games on the big screen using a DualShock 3 controller, but there's actually more to it than that. While PS Vita TV has a card slot for Vita games, and accepts Vita memory cards, it will also let you use video streaming services (such as Hulu) and more. It will even let you play your PlayStation 4 via Remote Play with DualShock 4; this functionality will come later via system update. It will also let you play PSone Classics and PSP games through it, again using the DualShock 3. And it will connect to PlayStation 4 so that you can play Vita games through PS4, as well. PS Vita TV launches in Japan on November 14th, and will cost 9,480 Yen ($95). A special verison of it, packing an 8 gig Vita memory card and a DualShock 3 controller, will cost 14,980 ($150). It sounds like it will eventually be released in the west, though a specific release date (as well as pricing information) is still unknown.2013-09-09T08:05:27.000Z

Along with these videos showcasing Sony’s new gaming information, a few extra tidbits were revealed. Check out the information that Joystiq got from the majority of Sony’s press conference:

– Vita TV is the littlest new console in the PlayStation family. It connects to the TV, can play Vita games via a slot (using a DualShock 3) and stream PS4 games using remote play. And it’s priced at around $100 in Japan. A little big announcement!

– If you wanted your Vita smaller but not that small and not so screen-less, there’s a new Vita model hitting Japan in six oh-so-pretty colors. The 2000-series Vita is 20 percent thinner, 15 percent lighter, and comes in pink. Pink!

– Almost as surprising as those reveals was the PS4’s Japanese launch date: February 22, 2014 – some three months after Europe and North America get their hands on the next-gen system. At least there’ll be a fair few launch day games by then.

– Plenty of games got unveiled for systems, including Soul Sacrifice Delta and Phantasy Star Nova for Vita, and Yakuza Restoration for PS4. Suda51’s Grasshopper has a new PS4 game in the works too, although quite what it is beyond a “supreme action” game with a strange title – well, we’ll have to wait and see.

– No Final Fantasy 15 yet to revel in yet, but Final Fantasy 14: A Realm Reborn has a PS4 beta date – the console’s launch day no less. Meanwhile, the Final Fantasy X/X-2 HD remasters are getting sentimental with a special edition Vita. 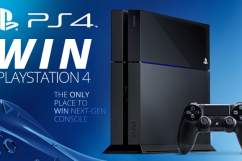