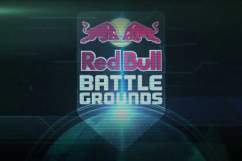 StarCraft 2 gaming tournaments have taken over live stream feeds across the nation. The constant, fast paced action and strategic player setups that build the audience’s anticipation all equal up to awesome gaming tournament events. This weekend, Red Bull Battle Grounds 2013 is going to the Empire State for a massive tournament throwdown.

The Hammerstein Ballroom is the place to be come this Saturday and Sunday. Here’s the top 10 facts you need to know about this gaming tourney, the players involved and the live stream schedule.

1. The Red Bull Battle Grounds Will Be Shown Live

If you can’t make it to world famous Hammerstein Ballroom in for this weekend’s festivities, then there’s another way to see what’s going down – we’re going to host the live stream feed for every interested gamer to see. Make sure you head back here for the official live stream feed – Saturday, November 23rd & Sunday, November 24th (Doors open 12:00 p.m. EST/Show Starts at 1 p.m. EST/ 9 a.m. PST both days).

2. The Tournament Format Will Be Contested in a Double Elimination Format

This E-Sports tournament will feature eight invited expert StarCraft 2 players who will be split into two groups of four. Each player in their associated group will face off in a best of three-round double elimination format. The first player to pick up two wins will then move to the finals on Sunday. The player groups go by Group A and Group B:

3. Here’s The Full Lineup of Tournament Players and Casters

StarCraft 2 diehards probably know these names. By the time this tournament goes down, you will too. Check out the full lineup of participating players and casters who’ll make their presence felt this weekend:

4. The Prize Money Pot is Pretty Huge This Year

Each of the eight players who are participating in the tournament will compete for a large some of cash this year. The total tournament prize pool will top out at $50,000.

5. A Bunch of E-Sports Events Are Currently Taking Place Before This Weekend’s Official Tournament

In order to build the hype and anticipation behind the Red Bull Battle Grounds NYC tourney, a bunch of cool events have already transpired and some events are even going to happen this Thursday and Friday. Make sure you hit up all these following events if you’re looking to converse with all the players/caster and party during all the gaming festivities:

6. One of The Best Players (Bomber) in in Heavy Preparation for this Tournament

One of the more popular competitors in this year’s tournament field (“Bomber”) came in 2nd place 2nd place in last year’s tournament. The video you’ll see above will head on over to Bomber’s home country of South Korea. This extra cool mini-doc takes a look into the way Bomber trains, plus you’ll get to hear his thoughts on his past successes, failures and his current mind set as an “older” player in the StarCraft 2 pro community. At the age of 26, Bomber is preparing to get the win through the use of “psychological warfare.”

7. Here’s the Brackets for Who’s Going to Play Who on Saturday

Check out the offical match setups below for Saturday’s tournament schedule below:

8. Seven Fan Created StarCraft 2 Player Maps Will Be Playable During the Tournament

Seven fan created StarCraft 2 maps will play the main battle grounds for all the tournament action. Each of these maps contains differing factors that will test each player’s patience, strategic know-how and perseverance against competing players. For a full list of all the maps, check them out below. Hit up the following LINK to get an inside look at each map and their overlying structures:

9. One of the Top StarCraft 2 Players Will Be Participating

Jang “MC” Min Chul is one of the world’s most renowned StarCraft 2 players in the world. MC’s accolades in the professional tournament field of the game are legendary. Take a look at MC’s winnings and some info on his game winning play style below, courtesy of the Red Bull Battlegrounds NYC 2013 offical web page:

MC was one of the first players to really dominate StarCraft 2, becoming the GSL’s first two-time champion in early 2011. From there he became a regular finalist and semifinalist at tournaments around the world, and took home both the 2012 Intel Extreme Masters world championship and the Homestory Cup title.

More than consistent, however, MC is also incisive. He was one of the first players to start to figure out Heart of the Swarm, commenting at MLG’s Winter Championship that his opponents were still playing Wings of Liberty while he was playing Heart of the Swarm. You don’t get a career like MC’s without mastering every single matchup, through every patch, change, and expansion.

If you’re going to be in the Big Apple this Saturday and Sunday, there’s still some tickets available for you avid StarCraft 2 fans out there. Two-day passes for Saturday and Sunday’s tourney events are being sold if you’re looking to be present for everything that goes down. Hit up Ticketmaster and make your way to the Hammerstein Ballroom to become a part of this massive E-Sports showdown.