6. A Slew of Familiar Stages From The Show Are Being Added In

As for the game’s stages, here’s the full list of each one below:

7. A New Development Team is Creating This New DBZ Fighter

DBZanto interviewed the producer of the game, Kunio Hashimoto, and he provided some details on the new development team that’s working on the game:

Many developers have previously worked on games like DBZ Dimps and Spike. This time, we wanted to incorporate something really different for this type of game on DBZ, we focus especially on the multiplayer action team. We worked with a development studio called Artdink. This company is very talented regarding the multiplayer game. So we thought that working with Artdink, we were able to offer something new in terms of features or gameplay. We aim to create a new type of DBZ game has led us to work with the talented and renowned studio in the world what Artdink. We thought that by working together we can offer a masterpiece.

During that same interview, Hashimoto provided some background info on what the single missions will focus on:

This game follows the story of the big manga or anime, original. Some changes were made due to the new features of the game, for example, during the Frieza Saga in the original work, Goku fights alone against Frieza. This game tells what would have happened if Krillin, Piccolo, Gohan or youth had enough energy and fought together against Frieza. Even if it is different from a “what if” (an alternative scenario) it is one of some sort. These are exclusive special situations this game, of course, we retain the basic story of the manga and anime. You can experience the story from the point of view of “Z Warriors” (Goku, Gohan, Piccolo, Tien, etc..) But you can also see the point of view of the wicked, such as Frieza.

9. A Sweet Pre-Order/Day 1 Bonus is Available for Early Adopters

The pre-order release for Battle of Z is getting packed with some awesome goodies. The GOKU Edition: A Collector’s Edition for the PS3/Xbox 360 will come with the Goku “Naruto Uzumaki Sage Mode” costume DLC, an art book and a Super Saiyan Goku figurine. Download codes for two exclsuive characters (Super Vegito and Super Saiyan Bardock) will also be available. Check out the pics for all those characters below:

10. The Game is Confirmed for a Worldwide Release

Dragon Ball Z: Battle of Z is most certainly getting released in Japan. But DBZ is still a beloved Japanese anime franchise in other territories, including the U.S. The game is releasing in three territories in January 2014 for the PS3, Xbox 360 and PS Vita: 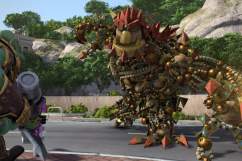