CES 2014 is the year’s initial mega event for tech heads and gamers alike. A cavalcade of amazing inventions and current technological items are on display on the CES 2014 showroom floor. Gamers will also have some exciting news to look forward to, since gaming luminaries such as Valve and Nvidia are in attendance and ready to wow the world with their newly announced tech.

Here’s all the video game related information you need to know about from CES 2014.

SteelSeries made sure to announce their new lien of wireless iOS gaming controllers — the Stratus. The controller will work with several Apple devices (iPhone, iPad and iPod Touches that run iOS 7 and AppleTV via AirPlay). There are two methods that allow the Stratus to connect to smartphone/tablet devices – physically snapping it to your device or connecting it via Bluetooth. Up to four separate Startus controllers can connect to a single device. The Stratus wireless mobile controller can run for about 10 hours of battery time, while it takes two hours to fully recharge itself.

The 3D, virtual reality gaming headset known as the Oculus Rift appeared at CES 2014. The latest prototype version of the gaming peripheral was showcased as a model that looks to be closest to the retail version that will launch sometime later at an unspecified date. The “Crystal Cove” prototype of the Oculus Rift reportedly comes with two new features – improved positional head tracking for users and low persistence (LCD TO OLED displays and better displayed frames. The image quality of this model is said to be a major improvement over the initial Oculus Rift models that were shown at conventions such as E3 2013. So far, the company behind this device has shipped the first versions of it to interested developers. $75 million have been raised thus far for the continued development and production of the Oculus Rift.

Nvidia debuted its next-generation mobile processor, the Tegra K1. CEO Jen-Hsun Huang made a live announcement during Nvidia’s CES 2014 press conference regarding the Tegra K1 — Epic Games (the developers behind games such as Gears of War and Unreal Tournament) will be bringing its next game development engine (the Unreal Engine 4) to the Tegra K1. This mobile computer chip/video game development partnership will surely result in some amazingly realistic graphics for the near future. Tegra K1-enabled products will become available in a quad-core 32-bit system chip that’s based on ARM’s Cortex A15 CPU architecture and a 64-bit dual-core “Super Core CPU.” These mobile computer chip supported products will arrive sometime in the early part of 2014.

Nvidia also announced that they have partnered with several tech companies in order to develop and manufacture a line of PC’s and Wi-Fi routers that are optimized for Nvidia’s GameStream technology out of the box. This GameStream technology allows gamers to stream PC games to the Nvidia Shield mobile gaming device. Future purchasers of these GameStream certified devices will have two options to purchase among – customer built PCs or certified routers. The current custom PC builders who have entered into a partnership with Nvidia include CyberPowerPC, Digital Storm, Falcon Northwest, IBuyPower, MainGear and Origin PCV3 Gaming. These companies will develop PCs with that are powered by the GeForce GTX cards, which are also GameStream certified. Wi-Fi Router manufacturers who are on-board with Nvidia include Asus, Buffalo, D-Link and NetGear. 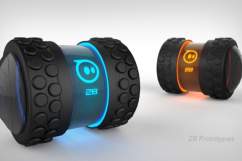 Orbotix Announces the Sphero 2B, a Fast Robotic Ball With Multiplayer Games

Gameloft’s Brothers in Arms 3 is actually moving over onto several mobile devices. The controls have been streamlined for touch screen compatibility through swiping and tapping to move and shoot. Over 100 levels will be available for play on iOS, Android and Windows Phone devices.