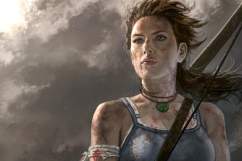 REVIEW: ‘Tomb Raider’ The Rebirth of Lara Croft is a Success

Crystal Dynamics and Square Enix pulled off something remarkable back in 2013 – they made Lara Croft meaningful and relevant again, years after her reign at the top of the video game world back in the 90’s. The offical reboot for Tomb Raider made Lara Croft human, heroic and a strong female protagonist that both males/females could get behind. This game is already one of the best action/adventure releases of 2013. A new “Definitive Edition” is now available on the Xbox One and PS4. Should gamers return to Lara Croft’s youthful beginnings or ignore this somewhat glorified graphical update?

For some, yes. For others, not really. Tomb Raider: Definitive Edition is purely a next-gen port that features all of the post-release DLC content. The most important upgrades that comes with this version are the improved graphics. Lara Croft’s facial features and the effects of harm to her body can now be seen and appreciated in a new light. Lara’s always-in-motion hair, the grime and blood that’s present all over her body as she treks across the island and the wide environments themselves all look even more amazing. PS4 owners can look forward to their version sporting 60 FPS (Frames Per Second), while Xbox One players will see their version of Croft move around in 30 FPS. There’s no need to worry about which version looks better though, since both editions don’t sport any major noticeable graphical differences. The 1080p resolution runs just fine on either machine.

Speaking of the PS4 and Xbox One, both console versions serve up some additional gameplay mechanics that take advantage of each system’s voice and motion technology. Xbox One owners can use the Kinect 2.0 to grab artifacts with their hands and examine them, plus there’s the option of using voice commands to open and view the in-game map. PS4 players can see their DualShock 4 light pad switch to the color red when a torch is lit. These features are more gimmicky than anything else, so you won’t have any reason to use these regularly.

One of the better added bonuses to this next-gen edition is the presence of all the downloadable content that became available months after the initial release of last-gen’s version. The multiplayer is still nothing worth investing any time or effort into, but the added presence of weapons from Hitman: Absolution may give some players an extra incentive to hop online. There’s also multiplayer maps, characters, an extra single player tomb, outfits for Lara Croft etc. to utilize this time around. All of these added features definitely make this rendition of the game the best, but gamers who’ve already experienced all this content won’t have any reason to get back into it at all.

The need to play this touched up, next-gen edition of Tomb Raider is split up among two opinions. It’s an excellent entry point and the perfect opportunity for gamers who haven’t played the PS3/Xbox 360 version. For those who’ve already spent hours traversing around that dangerous island that Lara inhibits, there’s really no need to re-invest in this definitive edition. All in all, Tomb Raider: Definitive Edition currently stands as the best last-gen to current-gen port of an already great game. For fans itching for a worthwhile adventure to play on their brand new next-gen consoles, this is the game to pick up.