Mario Kart 8 is set to land in stores on May 30, 2014, but the reviews are already out earlier than expected. So let’s just get to the good stuff and see what the best reviews are saying. Is Mario Kart 8 the summer Wii U exclusive that you need to buy? Let’s all find out and see if this kart racer was worth the long wait…

Game Informer loved the new HD sheen the visuals sport, the always addictive multiplayer options, the new addition of the highlights mode and so much more of the game’s standout features. They loved the overall package of Mario Kart 8:

Every Mario Kart title has been at least “good,” but there are some clear standouts. Mario Kart 64 hits the right nostalgic notes for fans of local multiplayer, and Double Dash shined with unique gameplay elements and great courses. Mario Kart 8 should certainly be added to the list of top-tier entries, and none of the previous titles can boast the rock-solid total package that this one offers. Say what you will about Nintendo sticking with the tried and true, but I have no problem with that as long as it stays this fun.

IGN loved the game’s amazing graphics, creative race tracks, antigravity mechanics and balanced items. They did have a few issues with the game’s character roster and missing online features, though:

Mario Kart 8 is the best kart racing game Nintendo has made in a long time. It strikes a careful balance between refining old ideas while introducing fresh new ones. Admittedly, its gorgeous graphics and jazzy orchestrated soundtrack bolster its presentation, but you’re getting a lot more than just looks with this one – although I spent an awful lot of time gawking at the details in slow-motion, the fast and furious pace of racing with friends both locally and online is what really kept me coming back.

Nintendo has done an admirable job of keeping Mario Kart relevant. How many franchises can you think of that have remained in top form for more than two decades? Not too many. I do admit that my first impression of Mario Kart 8 was pretty close to a yawn. Mario Kart is one of my favorite franchises, but it’s hard to get excited for the same old thing. But the more I played, the more I appreciated the many small changes, and grew to love my time in the Mushroom Kingdom. And now that yawn has changed to a shout of joy. It’s more Mario Kart! I’m happy Nintendo still understands what makes this series so darn fun.

GamesRadar loved the game’s solid movement and physics, beautiful graphics and implementation of online features. They lamented over the game’s lame Battle Mode and lack of fresher features:

Mario Kart 8 is a high-quality game, of that there is no question. But it often feels like you and it are simply going through the motions. And when the musical swell from Super Mario Galaxy’s Gusty Garden kicks in (aah, the goosebumps!), it does hammer home the fact that this game doesn’t offer anything unique of its own that sets it apart from other kart racers or even other games in the series. As a result, it’s very good–occasionally superb–but not quite exceptional.

Polygon was disappointed in how easy it was to unlock everything and the lack of a ranking system in the online racing modes. They were big fans of the game’s multiplayer, great items and nice selection of amazingly detailed tracks:

MARIO KART 8 DOESN’T MESS WITH THE FORMULA MUCH, BUT IT LEFT ME SMILING – Then again, “You might only be able to have tons of fun for a month or two” is the closest thing to a complaint I could level against Mario Kart 8. It doesn’t bring massive innovations to the formula, but it’s overflowing in that Nintendo magic that makes it so easy to forget about minor shortcomings. Its gorgeous looks and tightly developed sense of speed ensured that I was never left unhappy after a race, even when I blew it and came in near the end. What more could I ask for than a game that keeps me smiling even when I lose? 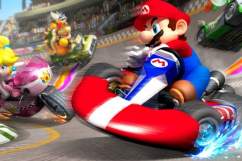