The Amazing Spider-Man 2 film has finally been released, which means an officially licensed video game is always expected to launch alongside it. Beenox has been responsible for developing the past couple installments for Marvel Comic’s amazing arachnid superhero. Spider-Man: Shattered Dimensions was one of the better games released and produced by Beenox, which led to many gamers putting their trust in the development studio’s abilities. However, Spider-Man: Edge of Time and the 1st Amazing Spider-Man video game adaptation were truly disappointments. Has Beenox gone back to the drawing board and put out another quality Spider-Man game? No, sadly…

The main storyline revolves around Peter Parker’s search for his Uncle Ben’s killer, which leads him to the infamous serial killer known as Carnage. Once the plot begins to move further, Spider-Man runs into a rouges gallery full of famous arch enemies (Kingpin, Electro, Shocker, Green Goblin etc.). Thankfully, everythign that transpires in the game doesn’t spoil anything from the new film. However, the plot itself isn’t worth getting invested in. It’s mainly used as an excuse to overload the game with several Spidey villains. The characters voice actors are more miss than hit, plus Spidey’s girlfriend Gwen Stacy is nowhere to be seen.

The plot is somewhat meaningless, but Beenox tries to make you care through the use of conversational decision moments. At several points of the game, Spidey and Peter Parker engage in conversations with important characters that involve choosing different questions that reveal more of the plot threadings. These moments could have been a lot more interesting, but the fact that the questions you ask have no impact on what happens afterward is a letdown. The graphics at least look decent enough. The wide open New York City that Spidey will zip around in is full of recognizable locales, plenty of public activity and cool Spider-Man easter eggs. Of course the next-gen renditions of the game look considerably better than it’s last-gen counterparts.

The audio is one of the bigger letdowns of the game. You won’t be hearing the film’s voice actors reprise their roles, which means you’ll have to deal with some generic voice actors you’ve probably heard in other games before. Spider-Man is known to be one of the funniest super heroes who’s always on hand to deliver some witty quips. Problem is, his one-liners are completely unfunny and repetitive. The voice acting is just as remarkable as the audio that tries to drive the action and story along.

Playing this brand new Spider-Man game is slightly disappointing in several ways, but at least on the game’s elements are above average – Spidey’s web swinging and overall movement. The brand new control scheme for Spider-Man’s web swinging activities feel a lot better than the one used in previous installments. Using your controller’s trigger buttons to web around the city feels natural. As you upgrade Spider-Man, he’ll become an even more awesome acrobatic thanks to faster web maneuvering and more powerful offensive moves. Most of the fun for this action/adventure comes from keeping Spider-Man airborne while he zips through the Big Apple.

Once you land on solid ground, the game’s quality tends to get buried underneath repetitive missions and lame combat. The main story missions are cool for fans since they involve many of the Spider-Man’s villains. However, the side missions are pretty much all the same and they hardly change up once they pop up again. Once you’ve rescued a few people from a burning building or fought off some thugs one time, you’ll quickly grow bored once you’re asked to do it several more times. The action sequences are a sad attempt at replicating the combat system seen in the Batman Arkham series. You may get access to new moves, but you’ll mostly be bashing the same attack button and getting involved in the same tired fighting sequences over and over. Countering from time to time still doesn’t raise the combat sequences up from its boring quality.

The only other good element that exists in this average Spider-Man game is the attention to detail for fans of the character and the comics. You’ll find yourself suffering through the lame gameplay because there’s tons of cool outfits, comic book pages, concept art and even more to unlock (the Stan Lee cameo is worth checking out, too). Upgrading the many Spider-Man costumes you’ll house in Peter Parker’s home look great and stick close to the source material, which is a great nod to Spidey’s long history.

The Amazing Spider-Man 2 is what gamers expected it to be – another average and half-hearted attempt at creating a quality Spider-Man game. The gameplay is repetitive, the plot is nothing worth paying attention to and the audio is entirely off-putting. It may be fun to take Spidey all over the city and collect some new threads, but everything else brings down even the better qualities of this disappointing comic book/film video game adaptation. 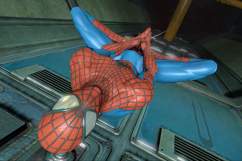