We’ve waited long enough, haven’t we gamers? The release schedule for Watch Dogs has repeatedly been pushed back, but now we’re finally prepared to see it make it’s public debut. Ubisoft Montreal has been developing this brand new IP for years and they’re finally ready to showcase it among the many past-gen and current-gen consoles currently on the market.

Before you power down Chicago with your trusty smartphone, make sure you have a clear idea of everything sorrounding Ubisoft’s new take on the world of technology and it’s effects on open-world gameplay and our society.

Here’s everything you need to know about the hacking, open world action/adventure release from Ubisoft known as Watch Dogs!

1. The Plot Revolves Around the Concept of Informational Warfare

Watch Dogs lets players take control of a highly skilled tech hacker named Aiden Pearce. Aiden Pearce exists in an alternate reality envisioning of Chicago, Illinois that is governed by the Central Operating System (CtOS) via a supercomputer. CtOS was instituted in the game’s world due to the belief that the Northeast blackout of 2003 was caused by a sole hacker.

Aiden Pearce’s main reasons for the missions he engages in revolve around his quest for revenge. Along the way, Pearce comes into contact with fellow hackers, resistance group leaders and more shady individuals.

2. The Main Premise of the Game Revolves Around Hacking

Aiden Pearce’s main weapon is a super powerful smartphone that’s capable of hacking into nearly every portion of Chicago’s CtOS controlled infrastructure and architecture. Pearce can take control of Chicago’s major bridges, traffic lights, road blockers etc. and use them to fend off the police and make quick getaways during heated situations. Pearce’s smartphone can also be used to access the personal information of every individual living in his alternate reality version of Chicago. While venturing through the city, Pearce can eavesdrop on other people’s conversations, intercept and prevent crimes given to the Chicago Police Department and read his own smartphone text messages.

3. The Multiplayer Component Involves Installing a Virus Into Another Player’s World

The multiplayer elements of Watch Dogs will focus on one-on-one interactive situations between two live characters.

As the 1st player tends to the mission is his world, a 2nd player has the ability to enter their game without any type of notification. The player that enters his rival’s world will have to physically locate that 2nd player and begin a new mission. As the invading player, you’ll be given the task of installing a back-door virus into the 2nd player’s smartphone. If you successfully install that virus, then you’ll have to handle a 2nd task that involves siphoning a portion of your rival players smartphone information. Both players must stay within a certain distance between one another in order for these multiplayer missions to take place.

One of the other modes promised for the game is an 8-player free roam mode, CtOS Mobile Challenge, Online Hacking, Decryption and a racing mode.

4. The Main Story Mode Campaign Will Be a Lengthy One

Aiden Pearce’s journey across Chicago will feature elements of cover based third-person shooting, parkour movement, stealth, hacking etc. The main story campaign has already been reported to run at an appropriately long length that caps out at 35-40 hours long.

5. The Standard, Special, Uplay, Limited, Digital Deluxe, Uplay Deluxe and Gold PlayStation Editions Will Only Be Available to U.S. Gamers

Gamers in the states will get to pre-order from a nice variety of collectors editions for the game:

• The Standard Edition of the game will come with the game and the downloadable add-on White Hat Pack for the PlayStation owners.

•The Special Edition will also include the same items plus the exclusive Breakthrough Pack.

• The Uplay Exclusive Edition (which will only be sold through Ubisoft’s Uplay Store) will come with the game and the following DLC packs: the PlayStation exclusive White Hat Pack, Breakthrough Pack, Palace Pack, Signature Shot Pack, Untouchables Pack, Cyberpunk Pack, Blume Agent Pack and Dedsec Pack and a Steelbook.

• The Digital Deluxe Edition (which is only available for the PC and PlayStation) will come with a digital download of the game, the White Hat Pack, Breakthrough Pack, Palace Pack, Signature Shot Pack, Untouchables Pack, Cyberpunk Pack, Blume Agent Pack, Dedsec Pack and the PlayStation exclusive Blume Agent Pack (only for this edition).

6. Two Collectors Edition Will Only Be Available in the U.K., the Middle East, Asia and Australia

For those looking to purchase the game in the U.K., the Middle East, Asia and Australia, you can set up your future purchases by checking out the details for the Vigilante Edition and Dedsec Edition:

• The Dedsec Edition will feature the physical copy of the game, the PlayStation exclusive White Hat Pack, the Breakthrough Pack, the Palace Pack, the Signature Shot Pack, a map of the in-game world, exclusive packaging, the original soundtrack, the Steelbook, a 23 cm (9 inch) Aiden Pearce Figurine, an artbook, four augmented reality cards and three exclusive badges.

7. A Mobile App is Launching Right Next to the Console Editions of the Game

The mobile app that will launch alongside the official console release of Watch Dogs will be offered through iOS and Android powered smartphones and tablets. Mobile users will be able to connect to the CtOS mobile app and control helicopters, play against online friends, check the status of your progress etc.

8. It’s Getting Released on Several Consoles Upon Its Final Release Date

9. The Wii U Version Has Been Put on Hold

The Wii U edition of Watch Dogs has been put on hold indefinitely; the worldwide release date schedule for the game has been pushed to the 4th quarter of 2014.

10. A Feature-Length is Already in the Works

Ubisoft is currently developing a cinematic take on the world of Watch Dogs in conjunction with Columbia Pictures and New Regency. Sony will handle the distribution efforts for the film in the States while 20th Century Fox will take care of the international film distribution rights. Hollywood script writers Paul Wernick and Rhett Reese have already been handed the script writing duties for the film. 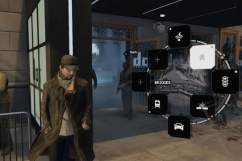 Sony and Ubisoft Partner Up for ‘Watch Dogs’ Movie