Movie tie-in games seem to be halfway decent or amazingly terrible. For every X-Men Origins: Wolverine, there’s a Charlie’s Angels.

With the 4th Transformers film now in theaters, it should come as no surprise that a game with ties to the film has been released. It’s taken a while to find some reviews for Transformers: Rise of the Dark Spark, but we’ve managed to unearth a few.

Here’s what all these reviewers feel about the latest 3rd-person, Transformers shooter.

ShackNews.com were less than impressed with the total package of this latest Transformers video game. They lamented that the game was entirely sub-par and a pale imitation of the two High Moon Studios games:

Less than meets the eye – Transformers: Rise of the Dark Spark isn’t a bad game, it’s just one that’s incredibly sub-par, especially in the face of such brilliant fare that came before. With a little more effort (and a lot more polish), we could’ve had the kind of Transformers fare that escalated the series to an all-new high. Instead, it’s a pale imitation of much better fare. On the bright side, at least there are no robot balls.

GamersHonestTruth.com seems to get a little bit on enjoyment out of the game. The reviewer found Rise of the Dark Spark to be a decently fun game. However, he went on to note that it’s really nothing special and not worth checking out if you’re not a Transformers fan:

This is a real rock and a hard place review for me. From a basic enjoyment perspective, I absolutely love Transformers: Rise of the Dark Spark. I think it plays great, offers a lot of fun on and offline, and manages to capture the magic of the franchise fairly well. If you’re a fan, don’t dismiss it right away. Expect something similar in quality to War for Cybertron. For anybody that just wants a new action game and has no attachment to Transformers, you’re probably better off not buying it. That’s sort of its Achilles heel, aside from the production values. It simply is not a game everyone will appreciate, as it requires you to love Transformers enough to forgive any shortcomings. I was able to enjoy myself, but that’s not to say it offers mass appeal.

Comic Vine put up their impressions on the game and noted that it wasn’t exactly a very polished game. It has several noticeable flaws, but the multiplayer options and Transformers fan service makes the game a step above average:

Transformers: Rise of the Dark Spark isn’t the most polished game around, but if you love the franchise, odds are you’ll be able to overlook its flaws and have a good time. The campaign may not wow you on a consistent basis, but Escalation Mode — especially with friends — is certain to keep you coming back for more. If you’re not passionate about the franchise, this game’s unlikely to change your mind about it and there’s definitely superior third-person shooters out there for you to play. But if you simply want to transform and blast swarms of enemies, Transformers: Rise of the Dark Spark is worth considering.

I would say that Transformers: Rise of the Dark Spark was a disappointment, but that would mean I expected something from it, and I didn’t. This is just another movie tie in title, and nothing much more. It tries to tie in the original cartoons, the movies, and the video games, but it fails. It just feels like a corny fan-fiction crossover plot painted over a mediocre third person shooter. If you are a huge fan of the Transformers, it wouldn’t be the worst thing to add this to your collection, especially since it’s being offered at budget price on last gen consoles. However, you’ll finish the single-player in a day and co-op only goes so far. So even if you do enjoy it, it will likely end up collecting dust on your shelf before long.

IGN.com weren’t huge fans of the game, either. They enjoyed the multiplayer Escalation mode and weapon selection. However, they universally panned the rest of the game’s many lame aspects:

Transformers: Rise of the Dark Spark has a few bright spots; the co-op Escalation mode is enjoyable, and there are cool weapons befitting the bots. But the bland campaign is a slog with uneven difficulty, while vehicle transformations and combat are largely unsatisfying. Without nailing that, you’ve got a bad Transfomers game. 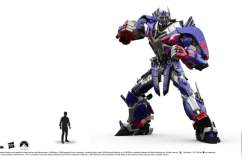 ‘Transformers: Rise of the Dark Spark’: 5 Fast Facts You Need to Know