EVO 2014 is right around the corner, which means there’s a ton of exciting details centering on this massive fighting game tournament.

This year’s installment of the biggest fighting game tournament there is features your favorite fighting games, pro players and two separate showcase events. From July 11th to the 13th (Friday to Saturday), the most elite fighting game players will fight for top honors at the Las Vegas Hotel and Casino. And hey, there’s going to an expanded “Bring Your Own Console Area,” too!

Here’s everything you need to know about EVO 2014! Make sure you come back here to watch the livestreams of every game tourney as it happens. We may just get a look at a new character addition to Mortal Kombat X, too…

1. There Will Be 8 Main Tournament Games

The main fighting games that will primarily be focused on at this year’s EVO tourney are listed below along with their total estimated prize pots. Click on each game to see the full breakdowns of the payouts that will be awarded to its respective top 8 winners:

Skullgirls: Encore will also be playable in a side tournament. Autumn Games (publisher) and Lab Zero Games (developer) have added a combined prize pot bonus of $5,000 to the tourney.

Friday and Saturday’s tournament proceedings can be seen at the following LINK.

2. A Ton of People Have Signed Up to Compete in Ultra Street Fighter 4, Ultimate Marvel vs. Capcom 3 and Super Smash Bros. Melee

Shoryuken.com has confirmed that a huge collection of fighting game pros have signed up for the three biggest games being played at the tourney:

As for the number of players participating in the other game tourney’s, you can refer to the reported numbers below:

3. Twitch is Sending Three Prominent Players to the Tournament

Shoryuken.com broke down the number of players who will be representing their respective countries:

4. Japan’s Most Dominant Fighting Game Players Will Be Participating

There will also be an influx of five excellent Japanese fighting game players at this year’s tourney – Daigo Umehara, Tokido, sako, Nuki and Haitani.

5. Capcom Will Be Adding a Huge Pot Bonus to the Ultra Street Fighter IV Prize Pool

Capcom is adding a $10,000 pot bonus for the Ultra Street Fighter IV prize pool. They’re also raising the stakes by adding an exclsuive tier to the Capcom Pro Tour ranking points for competing players. This huge sum of money will be distributed throughout the top 16 players who get ranked in the EVO 2014 tourney. 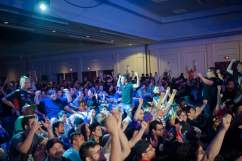