The release of Sniper Elite 3 could be the perfect remedy for bored gamers during 2014’s summer gaming drought. It looks like an incredibly fun mixture of 3rd-person world exploration and 1st-person sniper gunplay in a war-torn time period. The reviews are finally out, which means you can decide to pick up a digital sniper rifle or avoid it altogether.

These are the top 5 reviews you need to read!

IGN.com gave the game a pretty high score. They loved the game’s wide open levels, diverse way of killing your many enemies and its amazing sense of gore. They complained about the game’s lame plot and spotty A.I., though:

Sniper Elite III’s open level designs and objectives pack in more than enough variety and stealthy tension to counterbalance its thin story and shaky enemy intelligence, and experimenting with its explosive traps is almost as fun as popping skulls with a sniper rifle. The skeleton-shattering, long-distance kills are still its riveting centerpiece, of course, but even without the element of dumb fun they offer, Sniper Elite III would still be a smart, unexpectedly memorable experience.

PCWorld.com were huge fans of the gripping sniping sections and move to a different historical period of World War II. However, hey didn’t enjoy the brain-dead A.I. and somewhat confusing storytelling:

Sniper Elite 3 isn’t bad. It’s fun enough, and the sniping mechanics are great. But it’s a B-game, released during the perfect time of year for B-games and action movies—those slow, slow summer months. There are moments where it successfully makes you feel like a stone cold badass, feeding off your primitive instincts as you watch your shot roar across the map and smack into the skull of your target. Really, that’s why anyone is playing these games, right? For the sniping and the ballistics and the particle physics.

ComputerandVideoGames.com gave the game a decent score. They were very much into the game’s strong sniping gameplay, huge levels with multiple paths and massively grotesque slo-mo X-ray kill cams. They hated the dumb A.I., lack of close-up attacks and enemy detection/easy evasion:

The Sniper Elite series has never threatened to topple the Battlefields or Call Of Duties of this world, and this third entry never really comes close to changing that. But for those looking for a less gung-ho, more methodical approach to a war game, then ropey AI aside you could do a lot worse than this.

PushSquare.com noted that even though Sniper Elite 3 lacks the right amount of polish, it’s still a fun shooter that’s worth getting engaged in:

As in life, patience is also a virtue in Sniper Elite III. Those willing to spend their time slowly crawling into position, waiting for that perfect shot, will find an engaging experience that encourages experimentation through its enormous levels. While the needlessly graphic killcam certainly won’t be to everyone’s tastes, you’ll be hard pressed to find a more enjoyable representation of sniping elsewhere. As a result, even in the face of its general lack of polish, annoying bugs, and laughable story, there’s still enough good stuff here to recommend pulling the purchase trigger.

GamesRadar.com were big advocates of the game’s open-ended levels, strategic gameplay and the awesome feeling of nailing that perfect shot. They had problems of the kill-cam, lack of polish, flat plot and generic missions:

Sniper Elite 3’s focus on marksmanship over direct confrontation is admirable, but its lack of polish or any real personality keep it from standing out. 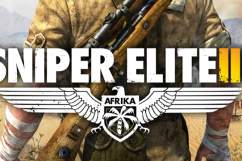