If you’re an avid gamer who can’t get enough of the fighting game genre, then you’re also a pretty hardcore follower of the FGC.

Whether it be through Twitch live streams and YouTube highlights, the internet is a wild world that’s filled with footage of pro fighting game players and the game they’ve mastered. Most pro FGC members compete with the one tool we’ve all come and recognize – an arcade stick. This list is packed with 10 of the best arcade sticks that are currently on the market.

If you’re ready to hop into EVO or some other major FGC tourney, then make sure you have one of these legit arcade sticks.

If you treat your Xbox One like a Killer Instinct machine, then this is the arcade stick that was made solely for your enjoyment. It not only sports some official video game artwork, it also features the familiar Japanese-style SANWA Denshi joystick/button layout. As far as next-gen console arcade sticks go, Mad Catz’s Xbox One fight stick is the way to go.

This HORI arcade stick is the cheaper option for beginners who’re looking to delve into pro fighting game playing. For just $70 or a much lesser asking price, you’ll get this somewhat simple looking joystick. It comes with just six buttons and two turbo settings, but it still performs like many other top-quality arcade sticks.

This arcade sticks comes in at a longer length than some of the other offerings on this list. The red face plate skin should make Taito Vewlix F arcade setup enthusiasts very happy. It also features the SANWA Denshi joystick/button layout, which makes this stick the best of both worlds.

This Street Fighter X Tekken-branded fight stick is a lit bit heavier and larger than more sticks, but it’s still one of the best ones you could buy. There’s plenty of space on the top of this controller that will allow you to go crazy with your hand’s button inputs. One of Japan’s best FGC members, Daigo Umehara, has thrown his approval behind this one. That should be all the reason to get this joystick.

Razer’s pretty knowledgeable about the world of PC gaming, but they also have some expertise when it comes to console peripherals. The SANWA Denshi button layout is instantly familiar and comfortable to use and the panel can be popped open with the push of a button. It looks pretty sleek, so you have an arcade sticks that has the looks and mechanics needed to make it awesome. 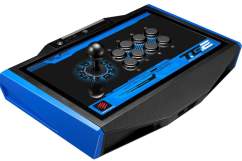 HORI is a masterful company when it comes to crafting the best looking and feeling arcade sticks on the market. This super sleek and customizable arcade stick comes with a nice slate of awesome features – three selectable turbo settings, an inner cabinet that can hold the 9.8-foot connection cable and the option to alter the joystick/buttons. 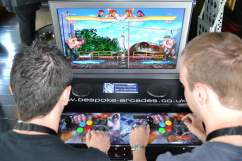 This arcade stick is perfectly made for the FGC members who loves to show off their baby even while off-screen. People will enamored with your masterful fighting game skills onscreen, but they’ll mostly be staring hard at your light-up fight stick. It comes with Qanba’s LED joystick and buttons, the option to select 3 GLOW LED modes and a sweet silver powdercoat finish.

If you’re looking to cop a solid and comfortable Mad Catz arcade stick, then this PRO edition fight stick is what you need to ASAP. Not only does it come in at a pretty affordable price, it also performs like some of its higher priced rivals. There’s an option on this bad boy that will award you multiple turbo speeds, plus its heavy base keeps it sturdy during heavy play sessions.

Here’s another excellent Mad Catz fight stick. Capcom and Street Fighter aficionados will simply fall in love with this joystick if they haven’t purchased one already. The overall components of this arcade stick owes its setup to the SANWA Denshi style of buttons. The official Street Fighter IV artwork is a nice plus, so this is a very viable option for hardcore fans of Capcom’s fighting game series.

This PS3-exclsuive arcade stick is not only created by HORI, but it’s also got the official stamp of approval from Sony Computer Entertainment America (SCEA). You won’t have any issues with this joystick mistakenly slipping out of your lap since it comes with an anti-slip base. The Start button also comes with a cover, which makes it easier to avoid hitting it during heated matches. The darker shade of colors on this joystick adds a little air of intimidation to it, too. 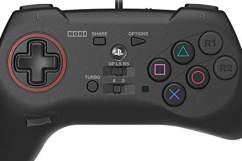 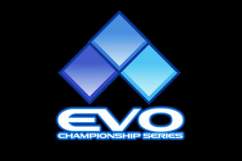