We all had a feeling the unbridled God of Thunder would be revealed as the latest member of Mortal Kombat X. Ed Boon hit the stage during EVO 2014 and made that reveal a reality with this new character trailer.

Raiden comes with three separate fighting styles that make good use of his elemental attributes. Thunder God Raiden has the ability to lay out thunder traps such as floating electrical landmines. The Displacer Raiden variation utilizes Raiden’s teleportation skills for offensive and defensive maneuvers. His final variation, Lord Raiden, makes use of lightning traps that can be linked to other traps and prevent an opponent from getting next to Raiden. 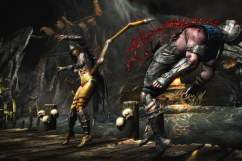