Resident Evil – Producer Announcement ESRBSCREENS REPRESENT PS3/Xbox360 VERSION (IN DEVELOPMENT) (Remember to activate subtitles on Youtube) We are proud to announce Resident Evil for PlayStation®4, PlayStation® 3, Xbox One, Xbox 360 and PC. Resident Evil will be available to purchase digitally across Europe and North America in Early 2015. The hugely popular Resident Evil series, having sold over 61…2014-08-05T10:09:33.000Z

The Nintendo GameCube received one of the greatest video game remakes of all time – Capcom’s HD re-imagining of the very 1st Resident Evil.

Fans have been clamoring for a return to the classic survival horror elements of the early RE games instead of the Michael Bay-esque explosion fests of the new releases.

Capcom knows what their fans want, which is why they’re going to bring back the Resident Evil REmake to a host of consoles in 2015. This super upgraded edition of the game will be making its way over to the Xbox One, Xbox 360, PS3, PS4 and PC platforms. Not only will it feature even better visuals, it will come with 1080p support on new-gen consoles, remastered 5.1 sound, the return of 4:3 ratio and 16:9 widescreen modes and the traditional series “tank” controls.

New school fans will get to play with an updated control scheme that will give players the option to move their character in the direction of the analog stick. You can all expect to return to that infamous mansion in Raccoon City come 2015. 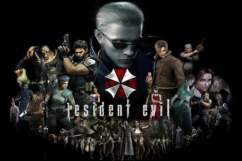 Check out the next page to see even more awesome pics of the HD upgrade of the upcoming Resident Evil REmake!