Anyone’s who’s taken the long trek that’s required to fully complete the 1st Tales of Xillia can speak to that game’s engaging plot. One of the major occurrences in that JRPG has led to a host of new characters and events for its sequel, Tales of Xillia 2. A newly discovered magical barrier was broken, which led to the world of Reize Maxia finally acknowledging the existence of Elympios after 2,000 years of separation.

You take control of a silent protagonist named Ludger Kresnik, who’s path crosses with an outspoken little girl named Elle Marta. A year has passed since the end of the 1st game, so familiar characters arrive with new visual designs and somewhat of a change in personality. Ludger and Elle’s lives soon become intertwined after a chance encounter on a train, which leads them on a tumultuous and excitement filled journey.

Tales of Xillia 2’s narrative is certainly worth delving into. You’ll be compelled to discover the motivations behind certain characters and find yourself tied to the developing bond between Ludger and Elle. Ludger’s involvement in major dialog sequences plays out through the players own decisions. This new features plays a big part in making you feel like an important element instead of someone who’s simply watching important events unfold. The returning cast are just as fun and easy to root for as they were before. Certain characters who’s personality traits were somewhat annoying to put up with from before (Leia’s constant overexcitement and Elize’s extreme timid nature) have noticeably been improved. Everyone has matured in some way and has been given a more interesting story to follow.

Xillia 2’s story is filled with the expected twists and turns of most JRPG’s, but you’ll still be glued to your screen and find yourself invested in each major moment as they happen. The plot truly picks up several hours into the game, which is due to the debt payback system. You’ll be boggled down with completing quests in order to clear the travel restrictions placed on your party. The quests given to you all fall under the “kill this many creatures” or “fetch this item” banner,” which grows tiresome after a while. Thankfully, making it to the next part of the intensifying story will give you the incentive to clear as much of your debt as possible.

The Japanese anime visual scheme that Tales of… fans have become accustomed to still looks excellent here. Ludger’s cool character design and the new environments you’ll find yourself in look appealing in every way. The recycled towns and dungeons from the 1st game all retain their previous look, but running through the same places you conquered once before is a bit of a problem. The voice acting for each character is still as strong as ever though, plus Elle manages not to be an annoying toddler who you’ll tire of hearing. Her witty banter and conversations with the past series characters are both bright spots in the game’s audio department. There are a few noteworthy songs here and there, but there’s nothing in the soundtrack that will immediately stand out to you.

Xillia 2 changes up its battle system a bit by introducing a slate of new features. Ludger comes equipped with three different weapon fighting styles, which can be altered in the middle of battle. Ludger also has the ability to change into a super powered form and lay down some serious damage on some of the tougher bosses you’ll run into. Ludger’s abilities make the fast paced, fighting game-esque battles even more of a joy this time around. The added mechanics of building up your affinity with certain party members for stronger attacks and targeting creatures with elemental attacks that weaken them add impressive little wrinkles to the enemy encounters.

When it comes to the character building aspect of the game, you’ll still outfit your party with new Artes and Skills. The sphere grid based leveling up system from the 1st game is non-existent now and a new elemental orb system has been put into place. Now you’ll be in charge of equipping your characters with orbs that provide them with new attacks and boosts to various other Artes. This system is a bit hard to wrap your head around and you’ll come to miss the 1st system seen in the previous game. It works, but grasping this new system’s full benefits are confusing for quite a while.

The aforementioned debt payment system is used a way to balance out the way players move throughout the world. Your basic run-through of each chapter will consist of moving into a new town, completing a main part of the story, fulfilling a bunch of paid requests then paying off a debt amount just so you can head into the next area. The quests format can put you into a lull at times thanks to their tired format. Thankfully, the character specific story sequences and abundance of money you’ll receive from participating in each battle won’t deter you from pushing forward. The excellent story will push you further along and keep you on the edge of your seat.

Tales of Xillia 2 is a respectable and enjoyable sequel to its excellent predecessor. The inclusion of player choice, new battle mechanics, an engaging story and a cast of returning characters with new looks are all positive aspects of the game. The issues of repetitive environments, bland quest structures and the debt system damper the experience a bit, though. Hardcore Tales of… fans and JRPG vets will still enjoy their time spent in this sequel’s interesting world. 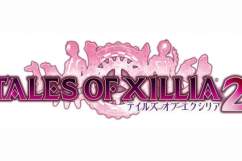 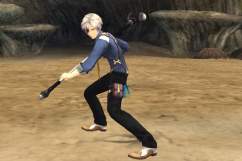 ‘Tales of Xillia 2′: The Best Photos You Need to See