Assassin’s Creed Unity will be Ubisoft’s franchise introduction to the Xbox One and PS4.

Unity will allow fellow live assassins group up in co-op missions and engage in Heist missions. This 11-minute demonstration features commentary by the game’s creative director Alex Amancio. These co-op Heist missions will include different goals to achieve, several guards to keep track of and the option to use coordinated assassin attacks on them all.

Enjoy this new game trailer and get a closer look at what you and your online assassins can accomplish when the game launches on November 11, 2014. Assassin’s Creed Rogue will also be hitting the PS3 and Xbox 360 on the same day. 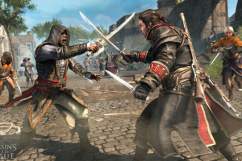