Survival horror fans can look forward to having a very scare-filled year in 2015.

Capcom is offering up two new releases in its Resident Evil series in the form of a remastered edition of the original and a sequel to the 3DS Revelations title. Check out the 1st trailer above to get an official look at the improved visuals and gameplay from Resident Evil Remastered.

You can expect to do some zombie killing in the old mansion in 2015 across the Xbox One, PS4, Xbox 360, PS3 and PC gaming platforms.

As for the newly revealed Resident Evil Revelations 2, this upcoming sequel will land on the Xbox One, PS4, Xbox 360, PS3 and PC gaming platforms sometime in 2015. All we know so far is that this entry in the RE series won’t focus on Chris Redfield and Jill Valentine. Kinda makes you wonder who’s going to be the main characters?

Check out the new teaser trailer above and try to figure out who you’ll be playing as. 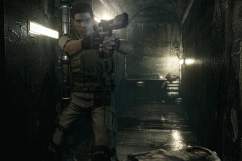