Don’t be surprised when your significant other (male lover, more likely) disappears into their man-cave for a while on October 7, 2014. Every year, the one basketball simulation to rule ’em all releases and takes over the world. Hardcore basketball fans are looking to get their money’s worth with the newest franchise installment from Visual Concepts and 2K Sports – NBA 2K15.

Oklahoma City Thunder’s Kevin Durant has been given the premier cover honors this year and Pharrell Williams has offered his curator contributions to the game’s soundtrack. There’s some extra details surrounding this much-anticipated basketball sim and we’re here to provide you with all that info.

Get ready for NBA 2K15 by reading up on all the details on the game’s new modes, soundtrack, pre-order bonuses and so much more.

1. A Brand New Face Scan Feature is Being Implemented

One of the game’s newer features in the face scan feature. Gamers can use their PlayStation Eye (PS4) or Kinect 2.0 (Xbox One) to fully scan their facial features. This in turn will lead to the game importing your saved facial construction onto your custom player. This revolutionary use of gaming motion peripherals will map out a player’s entire face right on down to the smallest points.

Check out the trailer above to see this face scanning technology in action.

2. An Exclusive In-Game Broadcast Program Will Be Making Its Debut

Another new feature that’s being implemented in NBA 2K15 is a new in-game broadcast called “2KTV.” This special in-game presentation (which can only be accessed on the Xbox One, PS4 and PC versions of the game) will showcase NBA 2K community news and plenty of custom game-related content highlights.

To give this mode even more authenticity, pro sports broadcast personality Rachel A DeMita will lend her vocal talents and NBA knowledge to the game’s broadcasts.

Take a look at the trailer above to get a hint of what 2KTV offers.

3. Crew Mode and MyPARK Mode is Coming Back, Plus the PS4 Version is Getting an Exclusive Play Mode

Xbox 360 and PS3 gamers will be happy to know that NBA 2K11’s Crew mode will be making its return for last-gen versions of NBA 2K15. Crew mode allows players to craft online teams by adding their created player or an existing pro NBA player onto a squad. Once online, your crew can compete against other crew’s. Another returning mode will be “The Park” mode that was first seen in NBA 2K14.

Another exclsuive mode making its way to the Xbox 360/PS3 is “2K Heroes,” a mode that features eight current NBA stars and legends. Each player has their own playable fantasy lineup of up to five player and themselves. These teams can be used in local and online play.

This renamed mode (“MyPARK”) gives players the ability to compete in 5-on-five street basketball games and join one of three teams – The Old Town Flyers, the Sunset Beach Ballers or the Rivet City Rough Riders. The new Jordan Rec Center location will be available for all three team affiliations this time around.

Check out the trailer above to see just how MyPARK works.

MyCAREER will also be making its return in a new storyline as well. The special “Mentors” trailer posted above will give you a sneak peak into the life of your newly created NBA player.

The PS4 version of NBA 2K15 will include its own exclsuive mode, which will be playable for 30 days upon launch. This mode (“The Stage”) is a high-stakes court mode that lets players bet high amounts of Virtual Currency against other MyPLAYER’s. Up to 45,000 Virtual Currency can be bet upon during a single game. The video trailer above will give you all the details you need to know about “The Stage.”

4. Pharrell Williams has Curated the Game’ Soundtrack This Time

Pharrell Williams has lent his efforts to the game by crafting an awesome list of tunes that players will certainly enjoy listening to. Check out the video trailer above to see Pharrell Williams speak on his choice of songs for NBA 2K15’s soundtrack (the full list of songs can be seen below and the whole playlist can be heard in the following link): 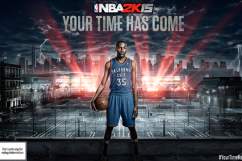 5. The Pre-Order Bonus Come in the Form of the “KD MVP Bonus Pack”

For those who’re looking to pre-order their copy of NBA 2K15, these are the bonus items that will come with it:

Head to the next page to check out the full list of Euroleague teams getting added to NBA 2K15!