One of the most important components of online gaming is the headset. Using one allows you to communicate with your team, irk your opponents and even annoy the entire lobby with tinny rap music. Unfortunately, the puny standard headset that ships with the Xbox 360 is barely capable of staying on one’s head, and it’s more likely to snap in half than it is to survive for any significant amount of time. You’re in luck, though; there are plenty of affordable headsets on the market that leave Microsoft’s standard in the dust.

We’ve rounded up the best headphones you can get on the cheap for your Xbox 360 right here.

What’s great about the Syba XB200-I headset is the fact that it’s an over-the-ear set you can get for less than $30. What’s not to love about that? Syba might not have the brand recognition of Turtle Beach, but it’s a fair competitor; a pair of over-the-ear Turtle Beach headphones would cost much more than what Syba is asking for. As long as you’re careful with them, the XB200-I should last you until you’re ready to spring for a deluxe set. 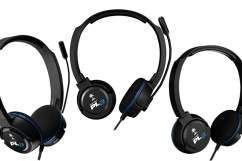 Two pairs of headphones for less than $15? Sign me up! The HDE 2 Pack may not be the sturdiest or most quality product on the market when it comes to affordable gaming headsets, but you get what you pay for. Considering you get two pairs, this makes a great buy for someone looking to share the audio love with their friends, family or significant other. The sets even come in different colors, and who doesn’t love personalizing their products?

The Sennheiser X2 headset is best described as an upgrade to Microsoft’s standard set that ships with the Xbox 360. The X2 features a single over-the-ear headphone with only a mute button and chat volume control built into the cable, but the set is still sleek and stylish, and sometimes simplicity is all you need. I mean, look how smooth and shiny it is.

If you want something that does exactly what the standard Xbox 360 headset does but bigger, better and sturdier, the Turtle Beach Xbox Ear Force XC1 headset is the one for you. It might only have a single over-the-ear headphone, but that lone phone brings crystal-clear game chat straight to your ear canal. Its bigger design means it’s easier to wear, comfortable and it won’t fall off.