The wave of new video game launches is behind us, and it’s left a painful scar in its wake — to gamers’ bank accounts, anyway. So many awesome games released recently for the PlayStation 4, Xbox One, Wii U and Nintendo 3DS (even the last-gen consoles — the Xbox 360, PS3 and Wii — got in the mix) that it’s hard to keep track of them all, let alone purchase each one and play them all to completion. But that’s what the holidays are for, right? Steep discounts and Black Friday sales will allow you to grab those games you haven’t made time for on the cheap and play to your heart’s content as Christmas and the holidays roll around.

But which ones are worth paying attention to? A ton of great titles may have come out in what’s felt like only a few weeks, but surely you haven’t played them all. Fortunately, we’ve got the goods on most critically games that released within the past three months. Read on to see which ones you’ve missed.

If you don’t love the Pokémon games, I question what kind of childhood you had. People like to make fun of the unconventional designs of the new Pokémon, but the truth is that weird-looking Pokémon have been around since Pokémon Red/Blue hit store shelves in the ’90s. Another thing that hasn’t changed is how fun these games are. I’ve poured close to a thousand hours into the series. There’s nothing quite like breeding, training and raising hundreds of fighting critters in a quest to be the very best. Pokémon Omega Ruby/Alpha Sapphire bring with them new mega evolutions, the 3D graphics of Pokémon X/Y and new features to make capturing and fighting Pokémon even more fun. If you’re itching to play through the original stories of Pokémon Ruby/Sapphire/Emerald, there’s no better time than now to nab Omega Ruby or Alpha Sapphire.

Bayonetta 2 has everything you could ask for in an action game: high-octane combat, ridiculous weapons and moves, insane enemies and bosses and a strong and sexy protagonist. The original Bayonetta was challenging, but conquering its difficult encounters and over-the-top bosses was nothing short of satisfying. Witch Time, a slow motion move activated by dodging at exactly the right moment, made you feel amazing. All of that and more is back in a surprisingly robust sequel, but the fact you can only get it for the Wii U is a bit disappointing. 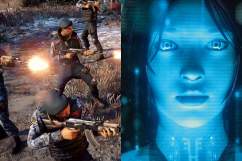