Black Friday may be behind us, but that doesn’t mean the deals are over. Cyber Monday is here to let the savings roll on. Now you can purchase great products from the comfort of your couch or bed today and, if you’re lucky, for the rest of the week. If you’re a gamer, there are especially robust bargains on plenty of awesome titles you can purchase now and instantly download to your console of choice or have shipped to your home. Even critically acclaimed games that came out only weeks ago are on sale, which means you should act now so you don’t miss out!

We’ve listed the five best deals you can get on Amazon video games right here for your convenience. Read on and save! And don’t forget to check out Amazon’s full page of Cyber Monday video game deals.

Dragon Age: Inquisition launched only weeks ago, and it’s already 25 percent off on all platforms! This is a deal you cannot miss; grab it now before it’s too late and experience what many are calling 2014’s game of the year.

So Bungie’s latest sci-fi shooter wasn’t the game-changing FPS it was hyped up to be. So what? Destiny was still one of 2014’s best games, and you can get it for $10 off its regular price right now.

Wolfenstein was one of this year’s surprising FPS games with its great presentation, story, characters, writing and, of course, gunplay. Get it from the comfort of your couch for two-thirds off. 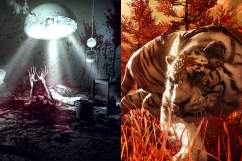 If you’re a PC gamer, you can download the amazing Middle-earth: Shadow of Mordor for only $19.99. Even if you want to buy a physical copy for your console of choice, you’ll only pay a few bucks more. 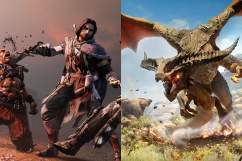 A “spiritual successor” to the horrifying Resident Evil series, The Evil Within, launched only in late October, but you can grab it now for up to 66 percent off. That’s a real … scream. Sorry, I had to. 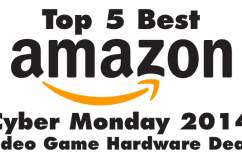