Running out of Christmas gift ideas for loved ones? Don’t worry! If that person you’re shopping for owns a PlayStation 4, then you’re in luck! There are plenty of great deals on PS4 games going on from now until Christmas day, which means you can get best-selling games without punishing your wallet.

Here are the five best PS4 game deals you can grab now, including price cuts on recently launched AAA games that gamer in your life is sure to love. 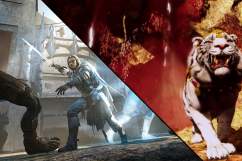 Yeah, Assassin’s Creed Unity has its problems. Glitches run rampant, and the combat is a bit simple. But the truth is, Unity provides a refreshingly simple story compared to previous iterations, almost entirely doing away with the modern-day narrative. Furthermore, the addition of co-op is exciting, and it’s rewarding to customize your own assassin across both single- and multiplayer modes. Ubisoft is issuing patches that will take care of the bugs, but in the meantime, you can grab Unity at half off, which is a fantastic deal for such a new game.

The LittleBigPlanet series has always been about two things: platforming and imagination. Run through levels blasting anything you can get your hands on with funny stickers. Paint your Sackboy to look as crazy as you want. Let your creativity run wild and create fun and inventive levels of your own to share with your pals. All of this and more returns with PlayStation-exclusive LittleBigPlanet 3, but the third entry in the franchise comes with a few new surprises. Besides Sackboy, there are three new characters this time around: Oddsock, Swoop and Toggle. Creations from previous LittleBigPlanet games are available from the start in LittleBigPlanet 3, meaning you won’t have to wait to start exploring awesome creations when you pick it up.

5. The Last of Us Remastered

Buy The Last of Us Remastered here.