Here are the top 10 tips/tricks/cheats you need to know for Empire Z!

1. The Basics to the Battle System

• The basics of the battle system are as follows – Infantry > Demolitions, Demolitions > Vehicles and Vehicles > Infantry. All of your troops should be prepared to handle the threat of opium attacks, by the way. You should always be prepared to amass a huge amount of troops since winning any future battles come down who has higher numbers. Troop training is one of the more important elements of the game, as well as resource collection.

2. Living Troops are Great When it Comes to…

• Defending your own city and also when it comes to attacking any infected cities. Living troops are incredibly strong against infected troops, plus they’re less likely to lose their lives when they’re in defense mode within your city. Living troops are pretty weak against live player defenses, though.

3. Upgrade Your Hospitals and Cloning Center!

• Hospitals are needed since they heal up your troops that are lost in battle. Upgraded hospitals do a great job of sending your troops back on the battlefield since you’ll be able to heal nearly all of them up. The troops that get healed by your hospitals are the troops that die by defending your city. As for upgrading your cloning center, getting it to a higher level will let you keep more experience for your revived hero. The better your cloning center, the less EXP you’ll lose.

4. Bunkers are a Necessity That You Need to Upgrade

• Your personal bunkers hold all of the items you place within them during raids from rival players. Make sure you focus on upgrading your bunkers so that you’ll never run out of space for any new acquired supplies. Never keep more supplies and resources that your bunkers won’t be able to withhold.

5. Attacking Infected Cities Will Grant You Zombie Leaders if You Take Them Down

6. You Should Always Speed Up the Construction Completion Time When the Opportunity Presents Itself

• You’l notice that that you’ll get the chance to speed up the construction of any buildings once their’s only three minutes or less left. Note that every time your VIP level gets raised up until level 10, you’ll get the opportunity to speed up any construction project’s completion when its down to 21 minutes or less. Make sure you play Empire Z every day so that your VIP status gets upgraded for a limited time. The more you log in to play, the greater the time length shall be for your VIP status.

7. The Skills You Should Focus on Upgrading the Most are…

• Most definitely your recruiting speed and specific troops abilities. The faster your rate of amassing more troops, the better off you’ll be in the long run when it comes to defending your city. As for what skills you need to upgrade for your troops, focus on sprucing up Special Forces (Infantry), Demolitions Expert (Demolition) and Vehicular Manslaughter (Vehicles).

• One of the more primary goals of Empire Z is by joining an active alliance. Before you make a decision on what alliance to align yourself with, take a look at the list of alliances and check out the starter alliance they’re associated with. Make sure that alliance you join is full of live players who play on a daily basis, so that you’ll amass more gold and reap the benefits of your newfound group association.

9. Make Sure Your Upgrade Your Radar ASAP

WriterParty.com told players that they should pour their upgrade resources into their radar, as well as keep a close eye on invading armies making their way to your city:

Upgrade your radar because it will sense when you are getting attacked. If you are being attacked frequently, however, you can also go to the world map and see other players’ marches right there on the map, which essentially show you the same thing. You can use these to your advantage to prepare your city for an attack or to call your troops back to the city.

10. This To-Do List Will Push Your Farther Onto the Road of Success

The Empire Z Wiki guide offered a simple checklist of tips that will make beginner players progress as quickly as possible: 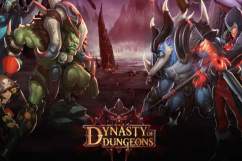 ‘Dynasty of Dungeons’: Top 10 Tips & Cheats You Need to Know