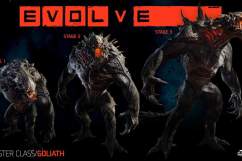 Turtle Rock Studios has a high pedigree when it comes to creating the finest 1st-person shooter experiences ever released. PC and console gamers have come to appreciate the fast-paced gunfights and tight multiplayer components of games such as Counter-Strike and Left 4 Dead. Now, gamers can look forward to engaging in a new FPS format with the release of Evolve. Here’s everything you need to know about this brand new 4 vs. 1 multiplayer experience.

1. The Gameplay Focuses on 4 vs. 1 Multiplayer

The four Hunters and single Monster are set out to accomplish a different set of goals among the game’s four game modes. Each of the playable Hunters come with their own special powers, which must be used properly in conjunction with other players in order to fend off other creatures and fell the major Monster.

As for the solo Monster, players will have to roam around the map killing other monsters and evolving so they unlock new powers. These powers must be used to complete game mode goals and kill off any Hunters in its way.

2. There are Four Separate Game Modes to Enjoy

Upon release, Evolve will come with four separate game modes. Here’s the official description of each mode straight from the game’s official website:

– Hunt: It’s a race for the Monster to eat enough within the environment to evolve to stage 3, and find the power relay on the map to destroy the objective. All along, the Hunters and Monster play cat-and-mouse, hoping to kill for a quick victory.

– Nest: Nest mode has the Monster player protecting its brood, randomly scattered all over the map, while the Hunters are out to scramble some alien eggs. If the Monster is able to get to the eggs, it has the option to hatch one of them into a minion – a stage 1 Goliath that runs around, aggro-ing Hunters. Hunters win by destroying all the eggs and the minion, or killing the Monster.

– Rescue: Injured colonists trying to escape the Monsters are placed randomly on the map. Hunters need to locate, revive and protect them as they make their escape. Monsters need to munch on as many of these colonists as possible and keep them from getting away. Whoever saves – or kills – the majority of the colonists, wins.

– Defend: This is it – the last stand. Winner takes all. If you’re playing from the Hunter perspective, you’re desperately defending the Evacuation point while the ship is fueling up to escape. As a Monster, you’re leading hordes of Goliath minions as you attack the Evacuation point in waves. Will the Monsters break through and destroy everything? Or will the colonists get away in time?

3. Each of the Four Game Modes Can Be Played Differently in Two Separate Structures

Playing Evolve’s four separate game modes can be experienced in two different ways. The Quick Play mode allows players to play each mode in single matches. As for the Evacuation structure, this operates as the 5-match online multiplayer story mode.

While it isn’t a campaign in the classic sense, there is a story to tell: The planet Shear is getting overrun by Monsters. Within five days, the battle for Shear will be won or lost depending on the actions of four Hunters…and, of course, one mutating Monster. Those five days are broken up into five rounds as you fight your way across the planet. The first round is always Hunt, on a randomly chosen map.

Evolve’s plot takes place among the stars. It’s story takes place a distant planet called Shear. The human race has veered off onto this planet and into the “Far Arm” of space in the distant future. Humans have established colonies within this region of space due to its valuable resources.

Monsters soon invade Shear and attack the people trying to operate there. A former tamer named William Cabot comes out of retirement to help kill off the Monster threat by assembling a team of Hunters.

The Assault class of Hunters are considered to be the main damage-dealers of the game. Their main special ability comes in the form of a Personal Shield, which gives Assault Hunters temporary invulnerability. The Assault Hunters that will be available upon release are Markov, Hyde and Parnell.

The Trapper class aids their team by tracking down and trapping down the Monster. Their special ability is the Mobile Arena, a force-field item that closes the area within it in order to trap the Monster. The three Trapper characters available upon release will be Griffin, Maggie & Daisy and Abe.