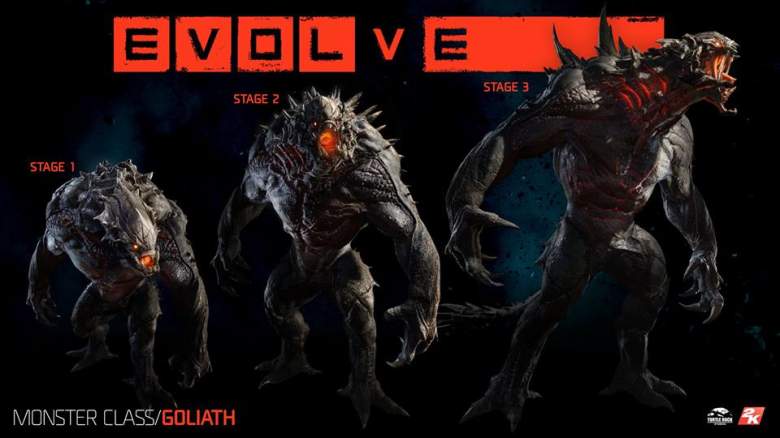 Let me first preface this review by saying that I’ve been excited about Evolve since its announcement, and have been following it closely. I was a part of all of the pre-releases betas, and even had some behind-the-scenes action with it at E3 2014. So, it’s safe to say that I had already played a significant number of matches before actually receiving my copy of the game. I’m not really sure why I feel it’s necessary to preface this review with that little tidbit, but I do.

Evolve is definitely an interesting and unique concept, to say the least. For some reason, the 4v1 scenario feels fresh, even though we’ve seen the idea in a few games — mostly for PC via Steam Early Access — in the past couple of years. But even with the idea of man versus monster being all-too-familiar in the wonderful world of video games, Evolve still feels original. The monsters are generally well-created, and Turtle Rock struck a perfect balance with the majority of their currently playable monsters being balanced in a way that they don’t feel overpowered but they don’t feel too weak, either. In my experience playing Evolve on Xbox One, it actually felt like the hunters won more often than not (in fifteen matches, the monster won just 5 of those). Of course, there are other factors at play here, such as whether or not the person playing the monster has any idea what they’re doing, whether the hunters know their specific roles, or whether someone is actually letting the AI control their character while they take a bathroom break (which for some reason is actually an option).

And, that’s a really important element of Evolve — your enjoyment solely depends on the people you’re playing with. If you’re a hunter playing with three other scrubs that have no idea what they’re doing and are running around the map like headless chickens, you’re going to find the hunt to be more of a chore than an adventure. Conversely, if you’re playing with three other friends that all know their roles and have experience playing Evolve already, you’re going to have a hell of a good time hunting down a Goliath. If you can’t find a group of three other players that know the importance of their role, you’re not going to like Evolve one bit, as you’ll end up in an endless chase for the match’s entirety. In fact, many times I felt like quitting out of the match after a few minutes since the other players weren’t chatting in their headsets to take direction or doing what they were supposed to be doing to help us win. But if you can find three other players that can communicate well, properly trap the various monsters, and play together better than a boy band, Evolve is going to be a great experience. The necessity to be tactical and smart while playing (as both a hunter and a monster) makes Evolve a generally rewarding experience.

For some reason, when talking to other players that actually did have headsets inbetween matches, it’s clear that many of them don’t like to play as the monster. I find that odd, since playing as a monster is what I find to be most enjoyable. If you’re more of a soloist, rest assured that playing as the monster is also a fun experience, one that actually doesn’t really depend on anyone else playing.

But Evolve’s biggest problem isn’t that other players greatly influence what you get out of it, but that the core experience grows stale after ten or so matches. Sure, there’s the Evacuation mode — which makes the game much more interesting, by the way — but even that contains the core Hunt where 4 hunters try to shoot up a monster. However, Evacuation’s different match types — Nest, Defend and Rescue — all provide an enjoyable break from the most common mode, the Hunt. It’d be great if Nest, Defend and Rescue were available as quick standalone game modes so that you weren’t forced to play five of them in a row but could instead play them in quick bursts. But that’s not the case, and if you want to play those other match types, you’d better sit down for a long gaming session.

As far as its presentation, Evolve both looks and sounds great. You’ll strike fear in those hunters as your Goliath’s steps rumble in their headsets, and jump when you hear the animal noises coming from the wildlife around you. The monsters are all well-designed, as each one has their own style and feel, but the hunters all feel like we’ve seen them before, seemingly lacking inspiration. The only graphical hiccup I came across in my 30+ hours of Evolve so far is a strange glitch in which the shadows of objects appear scattered about the map, as if to be positioned improperly. But that issue doesn’t pop up often, and only happened to me once.

Still, I can’t help but wonder how long it will be before we all forget about Evolve. I can’t help but wonder if Evolve is only enjoyable because there isn’t anything else that’s new to play (unless you’re a fan of the zombie genre, of course) or if Evolve is a great foundation that we’ll hopefully see more content added to. Hopefully, that is the case, and Evolve will see many new modes to round it out as a complete package as opposed to a flash in the pan released in the month of February.

Evolve can be compared to Juicy Fruit gum — it’s great and flavorful at first, but quickly loses its flavor and appeal. At launch, there isn’t really anything to hold my attention for the long run, and it feels more like a filler that will likely be forgotten soon. But with that being said, it’s a great foundation for a complete game that 2K Games and Turtle Rock will hopefully soon capitalize on. Is it worth the $60? Well, that really depends on if you have three reliable friends that are getting it also, or if you’re into dominating people online with a monster.