Here are the top 10 tips/tricks/cheats you need to know for Mortal Kombat X (Mobile).

1. The Basics to Dominating Kombat

• The mobile version of Mortal Kombat X tasks you with smashing a team made up of three fighters. You’ll tap away and hold onto your screen while you bash the opponents that come in your way. You can pull of three hit combos at all times when you tap the screen. Even when characters are blocking, they still receive chip damage. So land all three of your attacks when given the chance. As for the 4th and last strike of a character combo, make sure you pay attention when it pops up on the screen. You’ll need to swipe in the direction noted on the screen to land that attack. As for special moves, the best times to use them are when your opponent is recovering from the ground or when you want to use it as a combo finisher. Don’t just randomly throw a special out there.

2. Put Together a Team of Warriors Belonging to a Particular Type

• There’s a large variety of character types – Outworld, Martial Artist, Saurian, Spec Ops, and Oni. Putting together a very viable team is your 1st priority, so putting together a team with two or three character types is something you need to do. For example, the Shirai Ryu card gifts +5-percent attack power for fellow Martial Arts types. Plus, Troopers aid their fellow Spec Ops characters with the same boost. During the beginning portions of the game, this is a strategy you’ll need to adopt.

• This mobile fighter gets hard pretty fast. Once you get to the 3rd tower, you’ll start running into Silver tier characters. They can mop the floor with your Bronze tier fighters pretty quickly. They can even tear down your Bronze team with special moves…EVEN WHILE YOU’RE BLOCKING! The best method towards getting your team stronger got the challenges ahead is backtracking. Replay previous stages every time before you start the new one. Don’t start a new tower and try that method. You’ll wipe away the progress of the tower you currently started. But if you do encounter a tough team that kills your team easily, then you may just want to play a previous tower and start over on the one that defeated you before.

• Support cards can be bought with Koins. These special boosters up the characters that those Support cards are attached to. Make sure you don’t just spending Koins on any Support card you see. Tap on the cards to see their info and pick up on what character type it will make stronger. So for example, if you have a team full of Saurian characters then you’ll need to cop an item like “Saurian Cunning.” Specific characters come with their own Support cards (such as Scorpion, as evidenced by the pic seen above). You can purchase a Support card while you’re looking at character in your team if you’d like. Don’t forget that you can fuse two of the same Support types together to make your main one stronger.

5. If You’re Gonna Spend Some Real Cash, Spend Them on Souls

• You know what’s pretty hard to come by? Souls (that green currency at the top of the screen). Souls just happen to place Gold tier characters in your grasp. Plus you can spend some Souls on Kombat Packs, which awards you with one random Gold character plus two random cards. Souls awards you with the best unlocks in the game, if you ask us. If you’re going to reach into your digital wallet to spend some bucks on the game, put that money towards buying Souls. 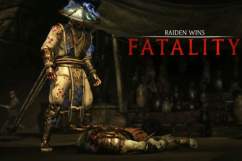 ‘Mortal Kombat X’: The Fatalities You Need to Know