It’s crazy to see how far Mortal Kombat X has come. One day, we were all just sitting in front of our computers watching Scorpion and Sub-Zero battle to the sounds of Wiz Khalifa. And now, we’re in 2015 and the game’s release is closer than ever.

Ed Boon and his amazing team of developers at NetherRealm Studios have upped the ante with their latest installment of Mortal Kombat. An epic story mode will be available, old and new characters round out the massive roster, plenty of brutal mechanics will spruce up each battle etc. Mortal Kombat X is coming with one of the most complete packages ever offered in a fighting game.

Here’s everything you need to know about the highly anticipated Mortal Kombat X.

1. The Storyline Takes Place 25 Years After The Last Game

Mortal Kombat X’s plot continues 25 years into the future and follows the conclusion of the last entry in the series. Shao Khan has been defeated, but Shinnok takes his place in attacking Earth with his army of Netherrealm forces. Shinnok resurrects and employs the aid of the Earthrealm warriors that perished in the last game.

Former characters such as Johnny Cage, Sonya Blade and Kenshi re-enter the war and do their part by opening a portal to the Jinsei Chamber, which holds the entirety of Earthrealm’s life force. They arrive just in time to find Raiden and Fujin doing battle with Shinnok. Eventually, they manage to imprison Shinnok within his magical amulet. However, Quan Chi manages to escape. That’s just the opening stages of the game’s Story Mode, so there’s a lot more to play through.

MKX’s Story Mode will not only feature the high production values and epic cutscenes seen in the last game, it will also include non-linear moments. These moments will play out in the form of Quick-Time Events that determine how the biggest moments for each character plays out.

2. The Roster Features Older Characters and Their Offspring and Students

Not only will MKX feature a ton of their most popular characters, it will also make the offspring and students of those fighters. Johnny Cage and Sonya Blade will fight alongside their daughter Cassie Cage while Jax will help save the world with his daughter Jacqui Briggs. Another new face for the series is Takahashi Takeda, who is Kenshi’s son. And finally, Kung Lao’s cousin Kung Jin will be making his debut. Check out the two trailers above and below to get a peek at the Cage and Briggs family.

3. The Rest of the Playable Cast Features a Nice Mix of Old and New Characters

The other new fighters to debut in MKX includes:

As for the rest of the roster, here’s the announced group of returning characters:

4. Each Character Will Have Three Variations for Their Fighting Styles

One of the cooler mechanics making its return from the 3D renditions of the series is multiple fighting styles. Only this time, each character will have to be selected with their chosen gameplay variation before a fight. This chosen play style will be used throughout the entirety of the proceeding battle.

For example, Cassie Cage’s fighting styles includes Spec Ops, Hollywood and Brawler. Each fighting style changes up the repertoire for a chosen character and adopts a different way of approaching each fight. Check out the trailer above to get a look at Ermac’s three variations.

5. Several Old and Fresh Mechanics are Being Added to the Game

Some of the older mechanics from Mortal Kombat will be returning, such as Brutality finishing moves, running up to opponents, X-Ray’s and the familiar use of gut-wrenching Fatalities. As for what features are being added, the “Quitality” will be making its debut. This move instantly kills an opposing player if they rage quit during an online match.

And finally, Faction Kills are the type of finishing moves that are tied to each of the game’s selectable factions. Check out the video posted above to get a look at a Quitality. 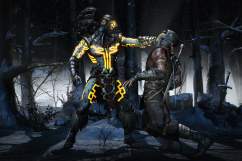